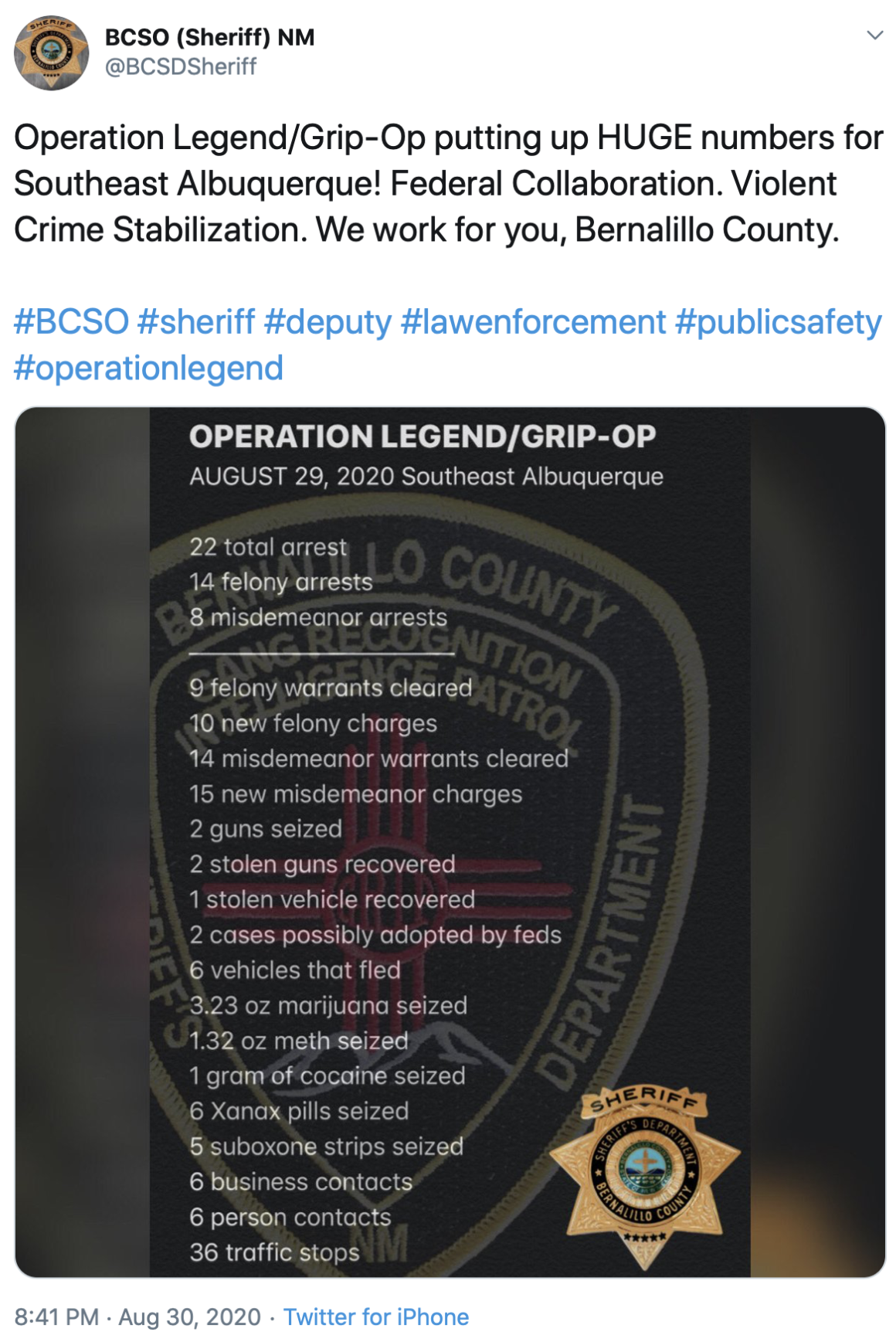 One month after the announcement of Operation Legend,  the Bernalillo County Sheriff’s Office (BCSO) has taken to Twitter to post a graphic bragging about the “HUGE numbers” the operation was producing. The results were...underwhelming. In addition to a handful of unspecified felony and misdemeanor arrests and “36 traffic stops!”, the graphic boasted of netting “two stolen guns, 3.23 ounces of marijuana, 1.32 ounces of meth, 1 gram of cocaine, six Xanax pills, and five Suboxone strips.”

While it’s amusing to imagine BCSO deputies and federal agents crowding around half a blister pack of Xanax for a publicity photo, it reflects the sad truth of how out of step modern law enforcement is with our communities. We don’t need or want anymore surges, out of town enforcers, or publicity hungry sheriffs running roughshod over our neighborhoods. The problems we face are real, but sending more people into overcrowded and COVID-ridden jails and prisons for drug related offenses makes our problems worse, not better.

In July, Bernalillo County Sheriff Manny Gonzales flew to Washington, D.C. in the middle of a pandemic to stand alongside President Trump to announce that BCSO would be participating in Operation Legend, a federal/local law enforcement collaboration with the ostensible purpose of fighting violent crime. The operation would involve deploying dozens of federal agents into our neighborhoods without consulting or coordinating with either those of us who live in the community, or the City of Albuquerque administration.

Needless to say, the announcement didn’t sit right with many of us. Our city has long been economically distressed and struggles with its share of problems born from lack of opportunity, a lagging education system, and inadequate public health resources to treat those suffering from addiction and mental illness. But Sheriff Gonzales and President Trump weren’t offering any solutions for these underlying drivers of crime in our communities — they just wanted to use our city as a backdrop for their political theater.

Sheriff Gonzales and President Trump weren’t offering any solutions for these underlying drivers of crime in our communities - they just wanted to use our city as a backdrop for their political theater.

We can be forgiven for reacting with alarm and skepticism. President Trump has shown time and again that he only cares about advancing his own agenda (himself) and punishing those he perceives as enemies. Indeed, as they announced the expansion of Operation Legend into Albuquerque, another cadre of federal agents deployed by Trump was busy brutalizing predominately peaceful Black Lives Matter protesters in the streets of Portland, Oregon.

Sheriff Gonzales has shown a similar predilection for brutality and callous disregard for the community he serves. July 22, the day of the press conference, was also the one year anniversary of the death of Elisha Lucero, a 28-year-old woman suffering from mental illness, who was shot 21 times by BCSO deputies. Under Gonzales’s tenure, BCSO shootings have spiked upwards and he has steadfastly refused to equip his deputies with the body-worn cameras that are standard equipment for the majority of law enforcement agencies nationwide. Gonzales also has a history of conducting flashy and uncoordinated law enforcement “surges” in Albuquerque’s poorest neighborhoods, especially targeting communities of color.

Operation Legend is just another pixel in the increasingly clear image of a criminal legal system that is irreparably broken and fundamentally unable to fulfill its basic function: keeping us safe. Here in New Mexico we are acutely aware of how limited our resources are. It is high time we stop throwing good money after bad and begin reallocating our scarce resources towards addressing our problems further upstream rather than relying on brute force after it’s already too late.