CBP Called Her "A whore”: How Border Officers Violate Rights and Strip People of Dignity at Ports of Entry

That’s what a U.S. Customs and Border Protection (CBP) officer told 51-year-old grandmother Amanda Rodríguez, as she passed through the Ysleta port of entry in El Paso, TX for her weekly shopping trip to Walmart. Her ordeal began last September when the agent stopped her at the border for a routine inspection as she crossed from Ciudad Juarez to El Paso to run errands. At the port of entry, the agent made sexist comments about her looks and asked her leading questions about whether she was entering the U.S. to perform “favors.” Rodríguez, who was confused by the line of questioning, didn’t understand well enough to contradict the agent’s allegations that she was a sex worker.

“Andas de puta,” the CBP officer aggressively told her, without any evidence to back up his claim: “You are a whore.”
Mrs. Rodríguez is not, nor has ever been a sex worker. With her husband of 33 years, Mrs. Rodríguez is a proud mother of two who, when not doting on her grandchild at home, works part-time for a community group that helps support women in Ciudad Juárez  seeking to escape domestic violence. But none of this mattered when things came to a head the following month.

When she tried to cross into El Paso again in October to get her shopping done, CBP immediately pulled her aside and detained her for ten hours. They falsely accused her of prostitution, threatened her with jail time, mocked her women’s rights work in Ciudad Juárez, and coerced her into signing a document  containing a falsified interrogation in English that she didn’t understand. They then told her that they had revoked her visa and she would be barred from entering the United States for a period of five years.

Ms. Rodríguez’ story is one of thirteen cases the ACLU of New Mexico Regional Center for Border Rights has urged the Department of Homeland Security Office of Inspector General and CBP Office of Professional Responsibility to investigate today.

The complaint details CBP officers at ports of entry in El Paso, Texas and southern New Mexico: forcefully yanking a defenseless boy out of a vehicle; calling a noncitizen “wetback” and denying access to her diabetes medication; subjecting multiple men and women, two of them in their fifties, to humiliating strip searches without consent; and coercing individuals to accept swift deportations with long-term consequences that bypass the judicial process. In multiple cases, border residents reported that CBP officers discouraged or failed to inform them of how to file a complaint.

As a border resident, I myself have experienced misogynistic and unprofessional treatment at a port of entry. Last year, while waiting at the Bridge of the Americas in El Paso, a CBP officer tapped on my car window to pry into my relationship status and ask for my phone number. I politely declined, but then agonized as he continued to follow my car and peer inside. As any woman knows, it is scary to face unwanted advances from men in public. It is doubly frightening when unwanted advances come from an armed man who claims extraordinary power to pull you out of your car, detain you, and order you to be strip searched. 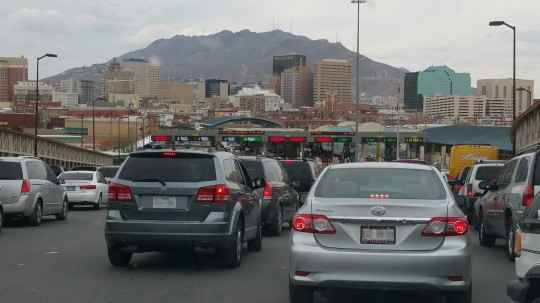 Every day, more than 600,000 people nationwide lawfully enter the United States through land ports of entry to vacation, visit family or shop. Cross-border commerce with Mexico, our top trade partner, fuels state economies and creates 1 in 24 jobs nationwide. Rather than celebrate border communities’ economic contributions and unprecedented public safety, irresponsible rhetoric has led to a dramatic buildup of CBP enforcement without commensurate investment in oversight and accountability.

Unfortunately, CBP officers who conduct themselves unprofessionally or abuse people are unlikely to face any sort of discipline. Peer law enforcement professionals, including a former top official at CBP, didn’t mince words when they recently concluded, “The CBP discipline system is broken.” Indeed, a May 2012 complaint filed by ACLU affiliates and detailing similar abuses at ports of entry border wide has gone largely uninvestigated.

Despite minimum standards developed to bring CBP in line with the principles of the Federal Prison Rape Elimination Act, a recent DHS Office of Inspector General audit found CBP lacks consistent reporting requirements or policies to ensure meaningful investigation of sexual assault or abuse allegations. That’s not comforting news for an agency whose former head of Internal Affairs blew the whistle on a “spike” of sexual misconduct cases between 2012 and 2014—a rate far exceeding other federal law enforcement agencies.

CBP’s newly minted Office of Professional Responsibility has a real test before it to uproot a culture of impunity firmly taken hold in our nation’s largest police force. Failure to transparently investigate allegations undermines public confidence that CBP takes abuse seriously and does a disservice to officers who act professionally.

Ultimately, reforming CBP culture will require changing officers’ beliefs and potential biases, including those related to gender. When CBP officers dismiss women’s rights or act as if a badge empowers them to make unwanted advances, they offend our most basic understandings of equity. That a single officer can hurl unfounded allegations, based on bias and not evidence, strip that person of their dignity, and then act as judge, jury and deporter makes a mockery of American values of justice.

Cynthia Pompa is a native of the border region, growing up in Ciudad Juarez and El Paso, Tex. She currently works as the Field Organizer for the ACLU of New Mexico Regional Center for Border Rights

ACLU-NM Urges Investigation into Abusive Treatment at CBP Ports of...