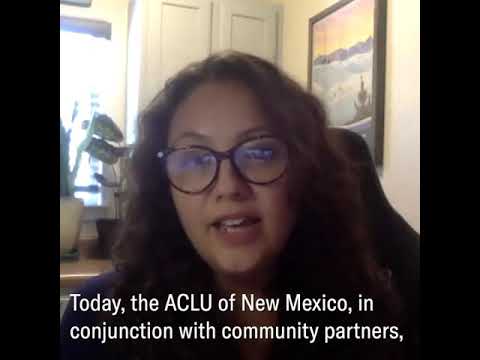 Title 42 was first implemented by the Trump administration, in violation of longstanding immigration statutes requiring that asylum seekers receive a full and fair proceeding to determine their right to protection in the United States and was extended by the Biden administration. Both administrations justified the policy by alleging it protects the public from COVID-19, even though public health officials have disputed this rationale.

The signatories of the letter ask Secretary Mayorkas to restore people’s ability to seek protection from persecution in the United States, as U.S. and international law require and to mitigate any risk of viral spread by implementing science-based measures such as testing, masking, vaccinations, and investing in community-based alternatives to detention in the intake of asylum seekers.

The following comments are from:

ACLU-NM Policy Director Nayomi Valdez: “Like the Trump administration, the Biden administration is illegally limiting immigration at the border under the guise of public health. The Title 42 policy does not protect people against the threat of COVID-19. In fact, it creates a different kind of public health crisis by expelling people seeking asylum to the countries from which they fled or sending them to wait in Mexico in crowded and dangerous conditions. We’re asking Secretary Mayorkas to put an end to this cruel and inhumane policy and restore the right to asylum.”

Representative Angelica Rubio: “For decades, both democrats and republicans have politicized the immigration system for political gain. Title 42 is a continuation of that, leaving thousands of refugees in peril. As a first-generation New Mexican, and the daughter of Mexican immigrants, Title 42 goes against everything I believe in. I urge President Biden to not perpetuate the political exploitation of our immigration system and instead work towards designing a system that is holistic, just and fair.”

Senator Carrie Hamblen: “It’s long past due that this administration does the right thing and end Title-42. The people arriving at our Southern border to seek asylum are fleeing unimaginable circumstances. It’s unconscionable that our government continues to put them in harm’s way when we have the resources and the ability to respond with humanity and care. I am honored to stand with the ACLU, my colleagues, and community in calling on Secretary Mayorkas to rescind this harmful policy.”

Representative Patricia Roybal Caballero: “We have a moral and legal obligation to do right by people seeking refuge at our borders. As New Mexicans, it is instilled in us to welcome and care for our neighbors in their time of need, but Title 42 ignores those values and treats our brothers and sisters seeking asylum as a risk instead of human beings. We can and should do better by ending this discriminatory order now.”

A copy of the letter is available below.