Photo Essay: Changing the conversation around incarceration through art

We partnered with local artist Eric Martinez and Warehouse 508 to bring renowned Chicano muralist Emanuel Martinez of the Emanuel Project to Albuquerque for the 508 Mural Fest. As formerly-incarcerated artists, Eric and Emanuel collaborated on a mural that seeks to reduce the stigma surrounding incarcerated youth, which can diminish opportunities for employment, housing, and education after release.  Their mural sends a message of hope to formerly incarcerated youth that they can turn their lives around and begin anew.

"Most of the themes of my murals have to do with showing some positive imagery related to our people... because of the lack of  true history that they put in the school system we have to come up with our own projects that give us self pride in who we are, right?" Emanuel Martinez 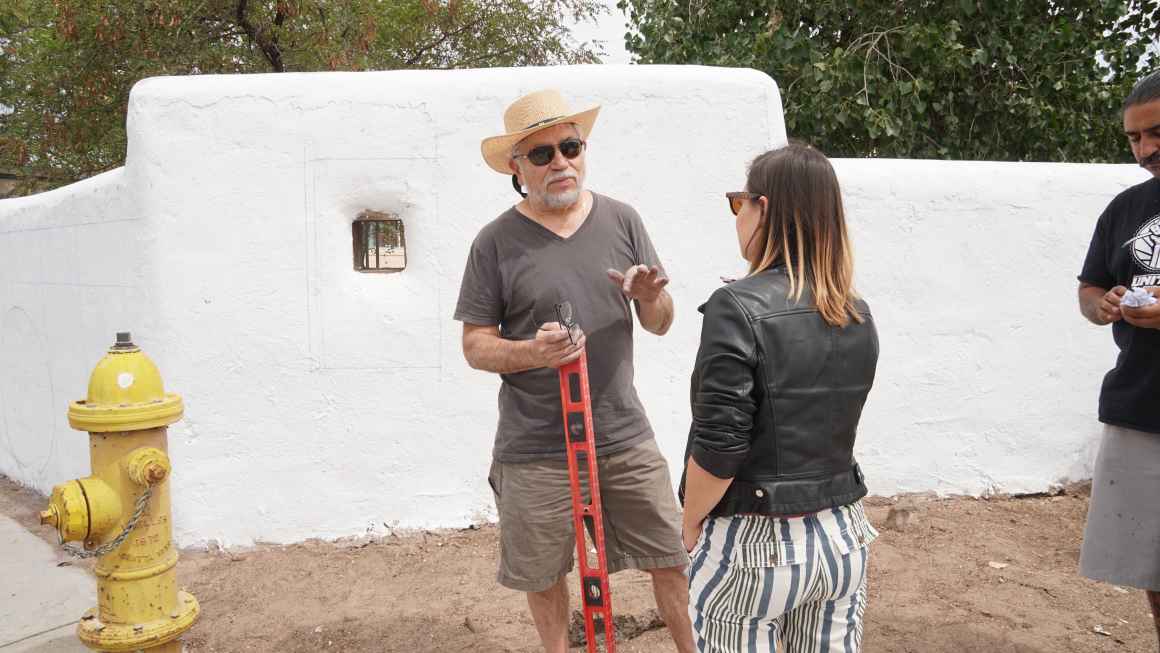 "I painted my first mural when I was 13 while serving a sentence in a juvenile facility in Colorado... and that's where I really discovered my talent and where I pretty much delcared myself an artist and said this is what I'm going to do. I was helped by an individual by the name of Bill Longley from Santa Fe who was a professional artist and started an apprenticeship training program for high-risk youth.  I was 15 when he helped me get out of jail and back into school... so he helped me for two years to get me back on the right road and I never went back to jail. It was thanks to him that I was able to follow this path."  Emanuel Martinez 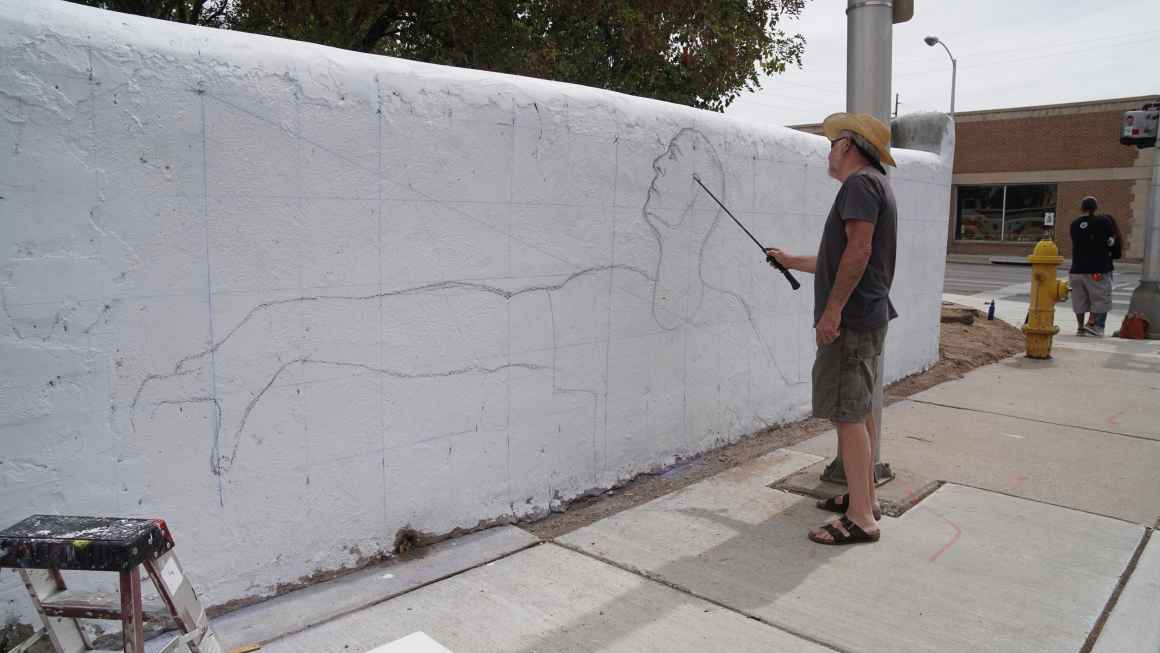 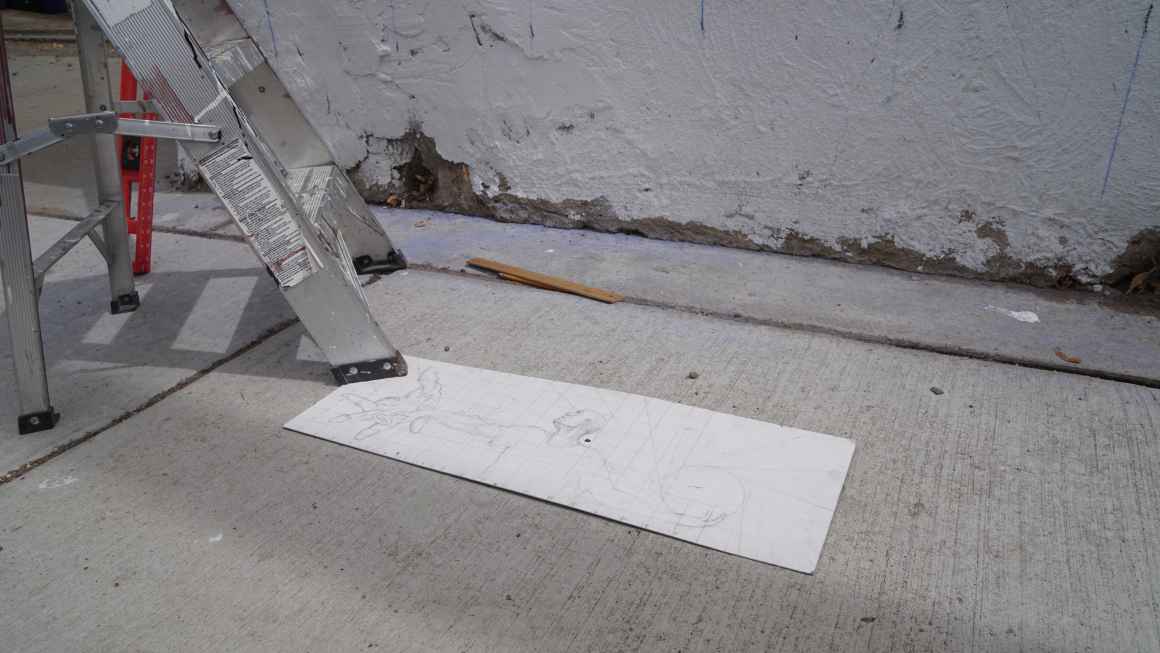 "Painting about incarceration is very important to me because that's where I learned and developed my craft. I served a 10-year sentence in the federal system at the youngg age of 22. I started off  drawing envelopes, panos, and dabbling in typical prison crafts like stringwork and weaving chip bags together. It grew into a passion, therapy, and expression in a place and time in my life where I felt I had no voice. Art changed that! Art was whatever I wanted it to be. Art took me to a different reality and outside of the walls of confinement. Art brought discovery and identity. I transitioned from staple prison arts into the fine arts. I started creating a body of work and eventually came to the realization that much if not all of my work still had the voice and spirit of such struggles. I finally gave into it and created a series around the journey titled "The Conviction Series". These works express more than the convictions that took me to prison but the convictions that you can turn those negatives into positives and such a series was a testament to just that." Eric Christo Martinez 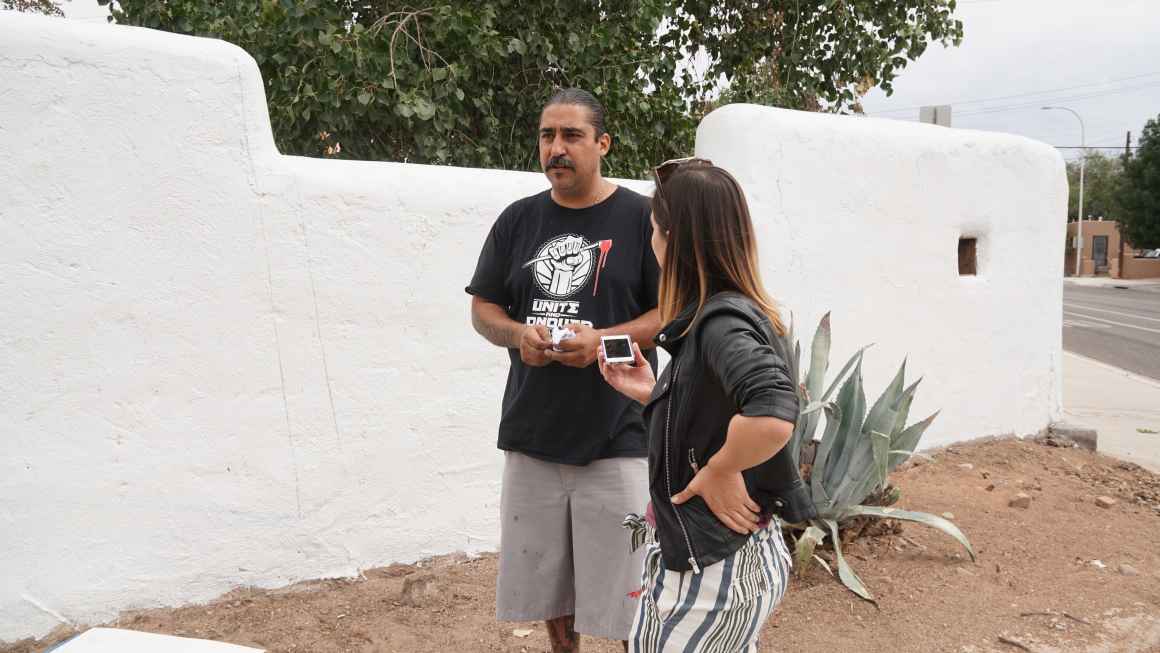 "Art throughout history has been a mirror reflection of society, but also a powerful tool for change! Art can be a voice for the voiceless and silenced. This mural is very important to me because it is my first piece of public art. I have always been fascinated and drawn to the mural movement and interested in moving from canvas to walls. When asked to put together some formerly incarcerated artists to execute a wall for the 508 Mural Festival, I thought of none other than iconic Chicano muralist Emanuel Martinez who started his art journey out of the juvenile detention center and went on to study with Mexican muralist Sequiedos and establishbed a prolific body of work that spans out from his hometown of Denver on throughout the nation, including juvenile detention centers with the Emanuel Project. It was a great honor to work side by side with such an inspirational artist for such an important reason." Eric Christo Martinez 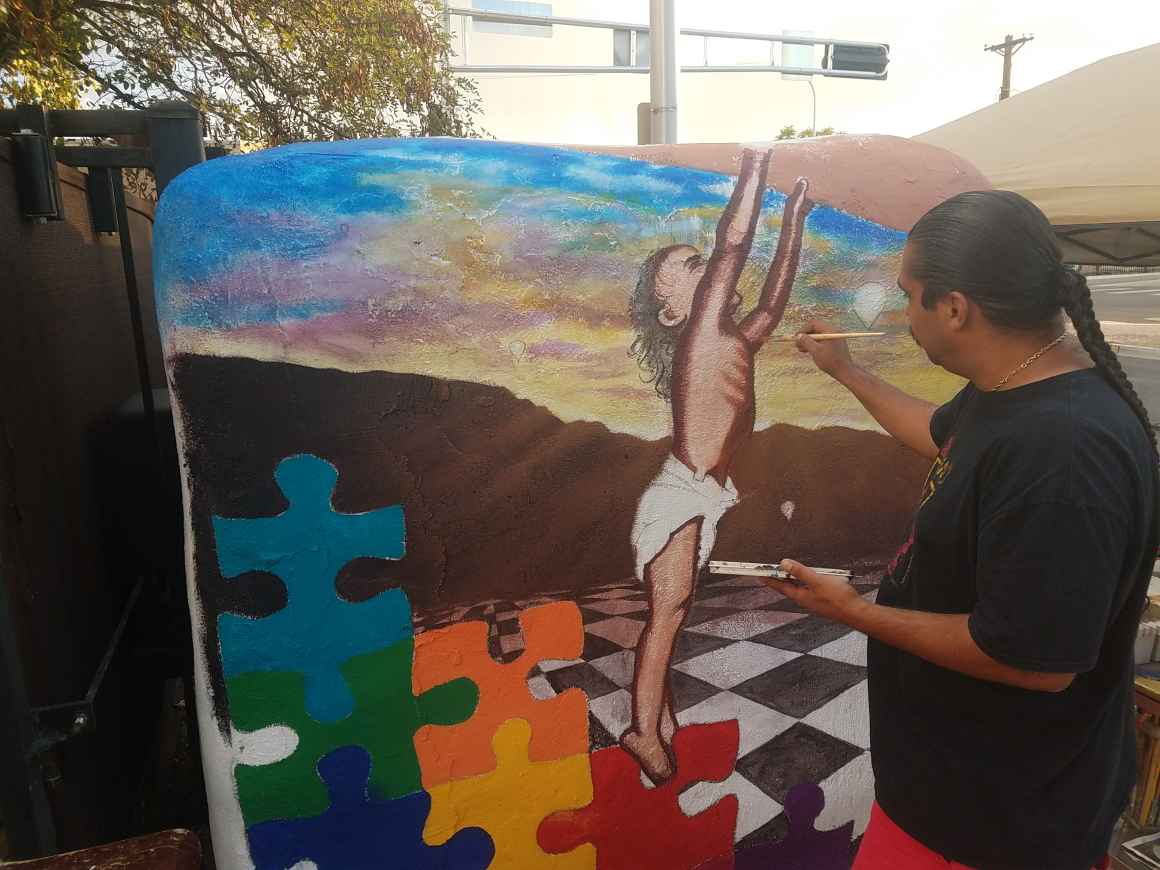 “This guy represents a prisoner who is coming out (of jail). There’s a large hand coming down here... people could interpret it in different ways.  You know it could be looked at as the creator or I see it as a very powerful, positive energy.  There’s some bars here.  He’s sticking his hands through the bar and getting his key.  This is a world, and it’s going to have an array of colors, and maybe some different options, directions for when he gets out.  The main thing is to try and stop the negative stigma that these kids have." Emanuel Martinez 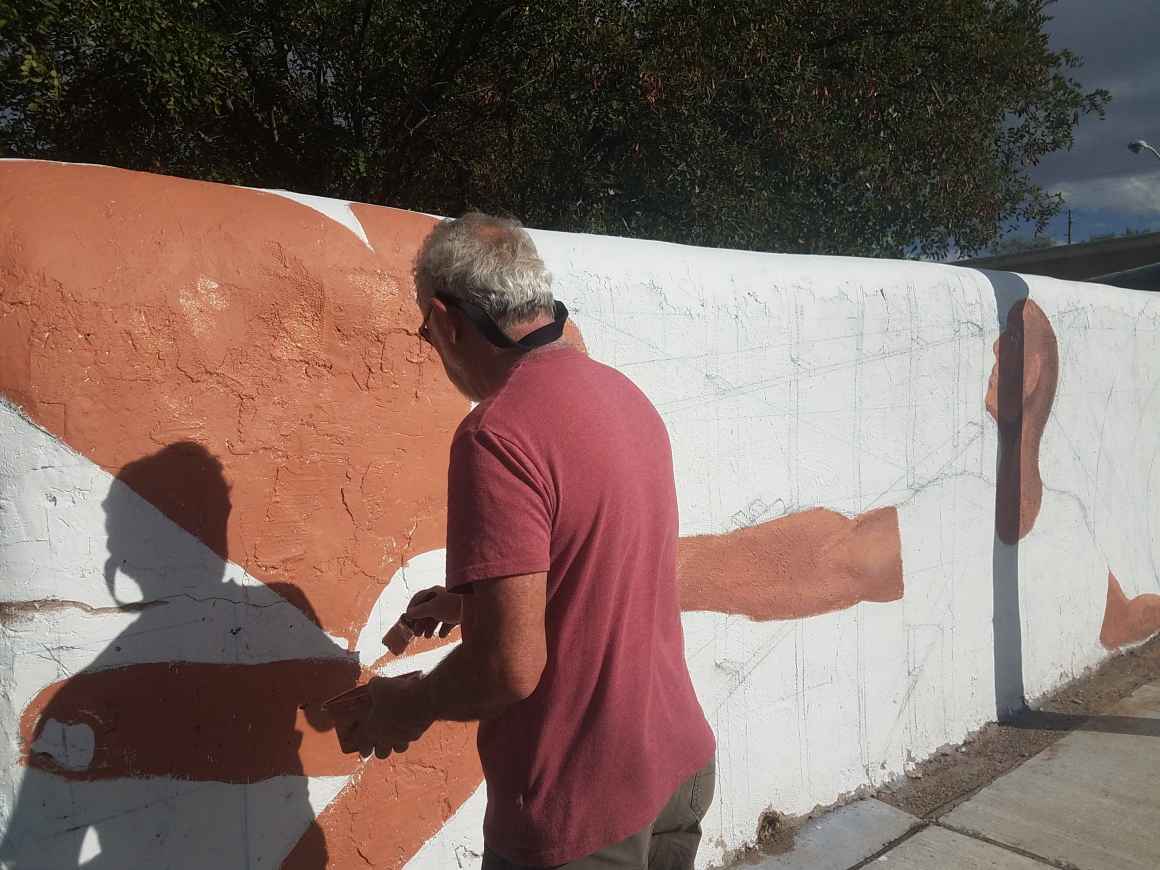 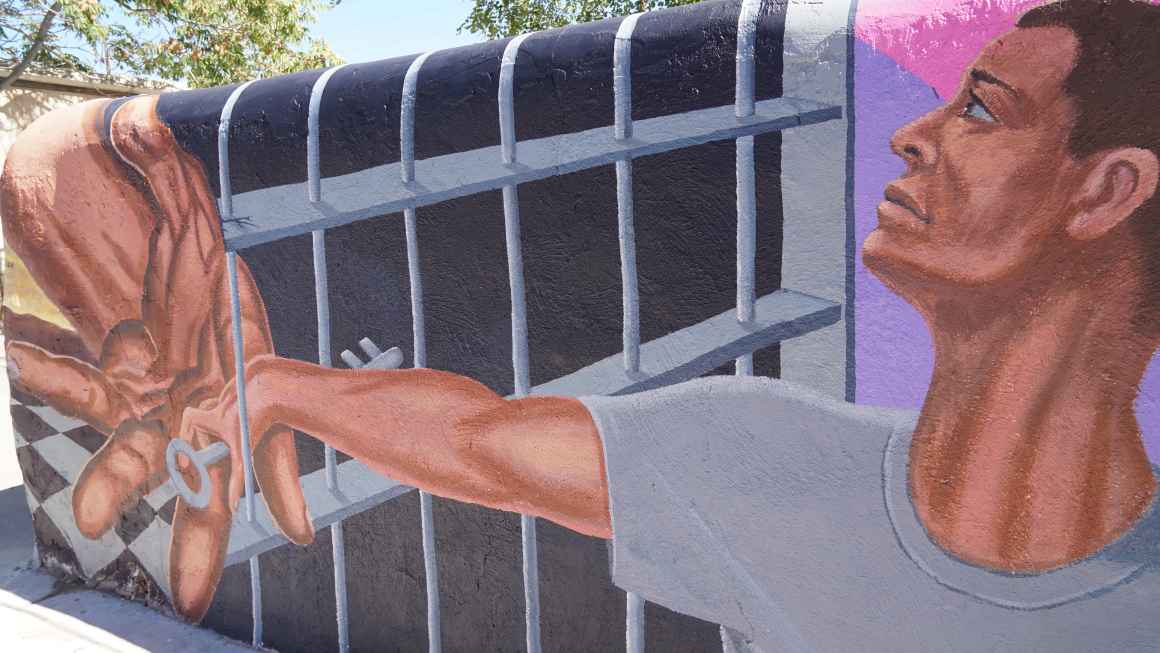 "There is an organization that was started here about 7 years ago - it was named after me -  and it’s called the Emmanuel Project. It’s a project where I am in charge of the mural component and I go in (to work with incarcerated youth) and once we have a wall identified, I sketch up a composition that has to do usually with getting an education, making better choices.  I mix the colors and pretty much have the kids paint about 80 percent of it and I do about 20 percent – just touch ups and refinements. But they do most of the work and this way they take ownership... we have data to prove that it has changed these kids a lot, their behavior, and in some cases they’re academics... it’s a very positive program." Emanuel Martinez 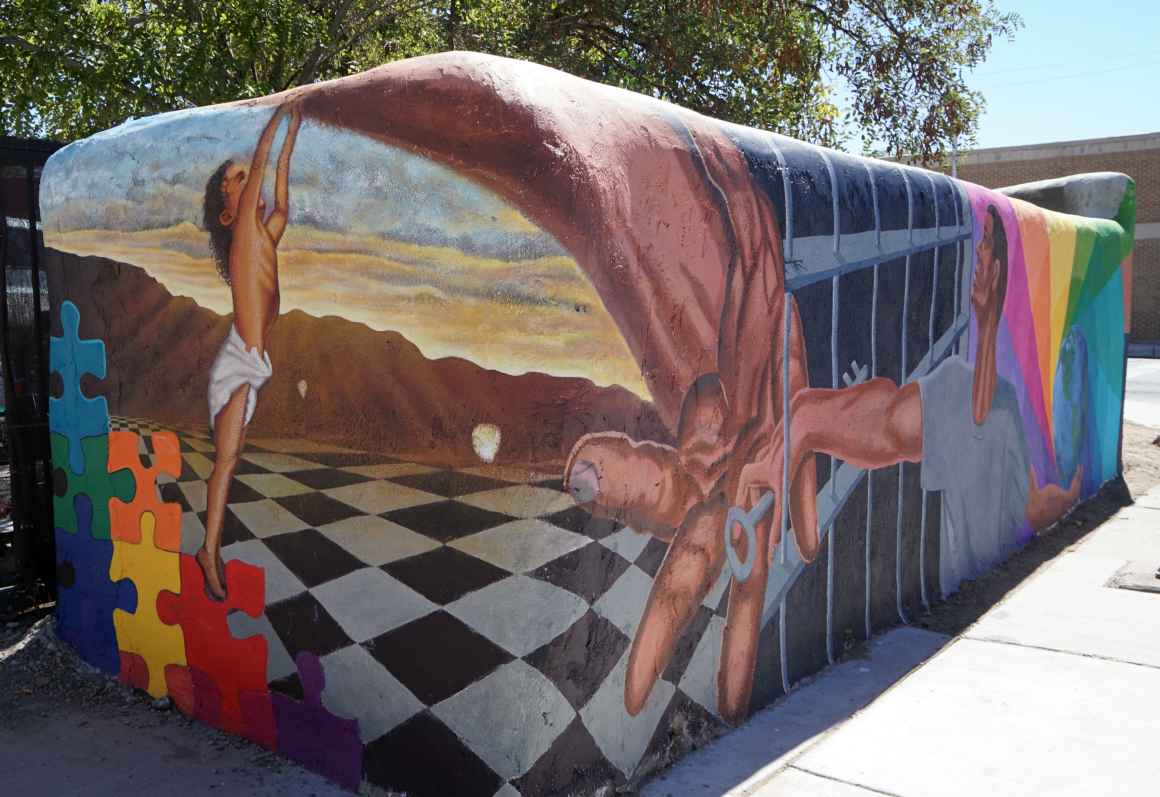 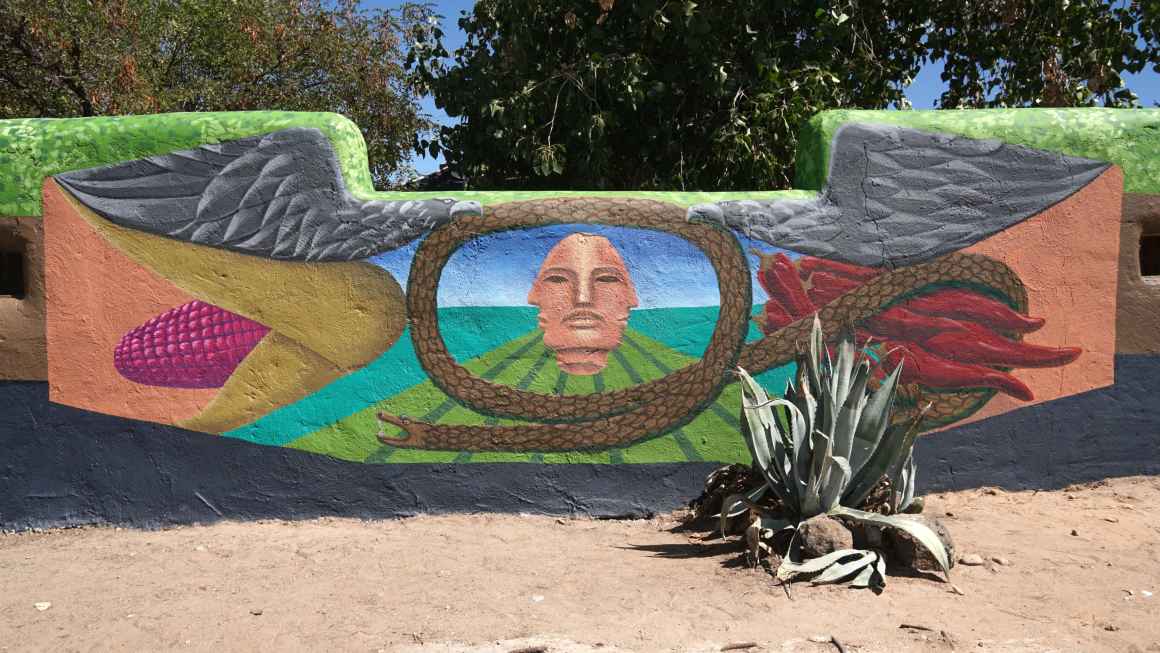 "Much of my work as of late has been focused around the growth of the Unite and Conquer art movement which aims to bring artists and communities together.  My hopes are that this particular mural brings encouragement to individuals walking back into this community and hope to the families waiting for their loved ones to return home." Eric Christo Martinez.

We support reform that takes a comprehensive approach to mitigating and eliminating the collateral consequences of involvement with the criminal justice system. Learn more about Emanuel Martinez's work and the Emanuel Project here: http://www.emanuelproject.org/

We Have An Ambitious Agenda for the 2023 Legislative Session

Hidden Taxes Don't Belong Anywhere, Least of All in Our Justice System