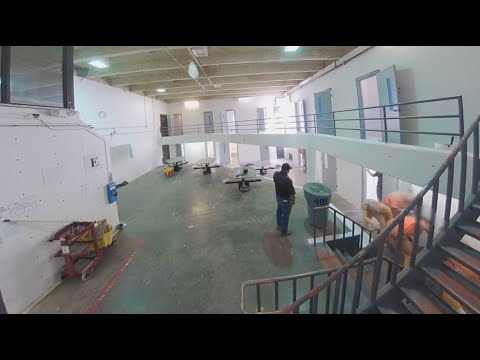 The incident also appears to contradict an incident report submitted by corrections staff that states the incarcerated men attacking the victim did so to protect a guard from harm.

The video from August 10, obtained by the American Civil Liberties Union (ACLU) of New Mexico, shows two individuals identified by a source and an incident report as Captain Jesse Diaz and Corrections Officer Cameron Watson watching as four incarcerated men punch and kick another in-custody man.

The incident took place in an empty housing unit on the main compound of CNMCF’s Reception and Diagnostic Center. It starts with Watson entering the housing unit with the eventual attack victim.

Once inside, the officer empties his pockets in an act that could indicate he was preparing to engage in a physical altercation. A long-time NMCD employee speaking on the condition of anonymity because they are not authorized to discuss the incident said it is not uncommon for an incarcerated individual and corrections staff to handle disputes via fighting.

The guard in question, the source said, has a reputation of frequently engaging in physical altercations with people in custody. But even multiple Office of Professional Standards force reports may not result in repercussions.

"Most are handled in house by our own captains and unit managers, so of course we protect our own,” the source said.

After a few seconds, the captain and the four men appear to start leaving the housing unit when one of the incarcerated men turns around and walks over toward the victim, who is facing Watson. The first individual then begins punching and kicking the victim, who does not appear to attempt to fight back. A few seconds into the attack, the three other individuals joined the beating.

Neither the captain nor the corrections officer attempted to stop the more than 30-second-long attack Once it is over, the four incarcerated men walk away. Neither guard appears to render medical aid to the victim.

The incident report submitted by Diaz, also obtained by the ACLU of New Mexico, states that the four individuals who attacked the victim did so after allegedly hearing the victim threaten Watson with physical violence.

According to Diaz, he was called to the housing unit with Watson and the victim because the victim was refusing to work. When Watson allegedly offered to show the victim how to perform the work required, the victim threatened to fight the guard, according to Diaz’s narrative.

That’s when the other inmates – whose presence in the housing unit the report does not explain – attacked the victim.

“[The victim] went to the floor and I was giving directive for inmates to stop they did comply,” Diaz wrote, saying all the men were then taken for medical checks. One of the attackers, according to Diaz, “stated that he was not going to let the officer get hurt because he respected the officer for doing his job.”

The surveillance video, however, does not suggest that the victim was a threat to either of the guards and he appears completely unprepared for the attack once it begins. Three of the four attackers and the victim were placed in solitary confinement pending disciplinary processes. For unknown reasons a fourth individual seen in the video engaged in the melee is not mentioned in the report.

The guards’ inaction appears to be contrary to the department’s ethics policy that requires correctional officials to protect the rights of those in their custody.

“Employees will respect and protect the civil and legal rights of all persons placed in the NMCD's custody or under its supervision,” the policy states.

In the U.S. Supreme Court case Farmer v. Brennan, the court ruled that it is a violation of an incarcerated individual’s rights under the Eighth Amendment when a prison official knows that an incarcerated person faces the risk of harm and does nothing to mitigate it.

NMCD’s policy dictates that officials are responsible for safeguarding the well-being of people in the department’s custody and allows them to use or show force to stop an attack. That does not appear to have happened in this incident.

“In the use of force policy, it says we are to use force to stop assault, battery, self-harm or any act of violence,” the source said. “They can’t hide the fact that [the guard] never called for additional responders or help of any kind nor attempted to help. It is pretty obvious.”

Editorial Note: The ACLU of New Mexico chose to blur the faces of incarcerated individuals in this video and to refrain from naming them in order to protect the identity of people in NMCD custody and who could face retaliation for their involvement in this incident. The guards are identified as government employees and law enforcement officials entrusted with protecting the well-being of people in the departments’ custody.