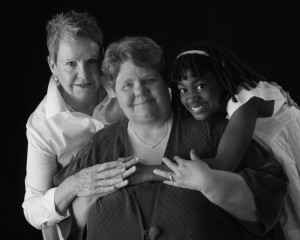 Miriam, 63, is the owner of Family Matters: Adoption Resources LLC.  Ona, 66, is the president of Prosperity Works, a non-profit that focuses on eliminating poverty, building assets for the poor and changing the racial, gender and class inequities in all areas of life. The couple met when Ona was working with the Coalition for Children and Miriam was doing postgrad family therapy. Miriam became interested in poverty work, several people told her Ona would be a good person for her to get to know, and they hit it off. They have three adult daughters. They have also adopted their 14-year-old granddaughter, who suffers from cerebral palsy.  She had originally been adopted by their middle daughter, but she has multiple sclerosis and her condition deteriorated to the point that she could no longer be the primary caretaker.

They jointly cared for both their mothers when they were dying, and were faced with “next of kin” and “family only” challenges when both of their mothers died within a year of one another.  They had to lie, saying that they were sisters to be admitted in some situations and to make medical decisions in others. In 2010, Miriam’s sister underwent chemotherapy for breast cancer and Ona took off 10 days from work to go toSt. Louisto care for her but, because Miriam and Ona’s relationship is not recognized in New Mexico, she had to take it as vacation time. 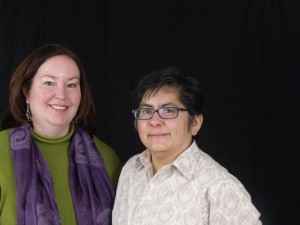 Kim, 44, is a financial advisor with an independent private practice. Rose, 47, is an part-time business manager for a non-profit and the owner of an accounting consulting business. Kim has two sons from a previous relationship.

Once when Rose was hospitalized, medical staff refused to provide Kim with any information on her condition even though she was the one who brought her to the hospital.  It wasn't until Rose’s family arrived that Kim was able to participate and get any information, and that was only after Rose’s brother convinced his parents to include Kim. After that scare, they had legal powers of attorney and other documents drawn. They carry these document around with them wherever they go in a large binder. These legal services cost the couple more than $3,000.

Rose and Kim held a commitment ceremony in 2010, attended by friends and family, but they also hope to be married someday in the State of New Mexico.
Therese Councilor and Tanya Struble 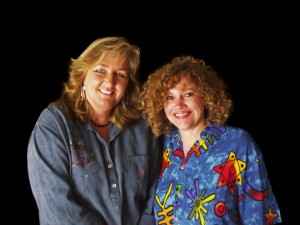 Together 23 years
Jemez, NM
Therese and Tanya own and manage a hot springs together. Tanya is also a real estate broker. Tanya has served on the Village zoning committee, and Therese used to serve on the Jemez Spring City Council. They are also both deeply committed to their business, and proud that their business has been recognized as the Number One attraction in Jemez Springs on Trip Advisor for the past three years. Therese and Tanya met through work and hit it off almost immediately. They moved to New Mexico from Dallas almost 20 years ago. Because they want to protect their commitment to one another the best that they can under the circumstances, Therese and Tanya are currently in the process of getting the necessary paperwork in place in an attempt to duplicate some of the protections automatically afforded to married couples in New Mexico.
Greg Gomez and A.D. Joplin 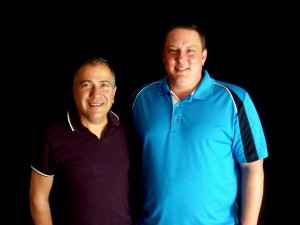 Together 7 years
Farmington, NM
Greg Gomez works as an interior designer and consultant. A.D. Joplin is a peer advocate for access to substance abuse treatment, focusing specifically on the needs of LGBT and rural patients. He will also be pursuing a Master’s Degree this fall. They met through mutual friends in Farmington. Greg raised a foster child, who is now 25. The foster son returned to live with Greg and Aaron for a period of 2 years in his early twenties, and the couple helped him get back on his feet during a time of transition. Greg comes from a large family, and the couple spends a lot of time with his nieces and nephews. They also enjoy cooking and entertaining for friends, collecting art, and camping. 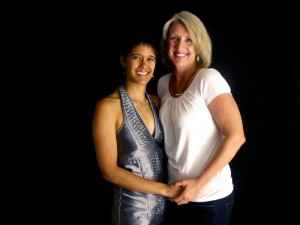 Monica Leaming and Cecilia Taulbee
Together 14 years
Farmington, NM
Monica is a high school music teacher and Cecilia is the vice president of a local credit union. Cecilia has three daughters from a previous relationship, all of whom consider Monica one of their parents. Although they met when Cecilia’s daughter was in the school choir, they didn't start dating until after she had left Monica’s class. Cecilia remembers thinking, with greater conviction than ever before “Oh my gosh, this is it. I want to be with this woman for the rest of my life.” She says she had never been so sure of anything in her entire life. Monica and Cecilia are both talented musicians and perform together in a band. Monica was born in Alamogordo and Cecilia in Farmington – both are native New Mexicans and have called Farmington home their entire adult lives. Although they had a commitment ceremony in 2000, Monica and Cecilia are waiting until they can do so legally to marry in their home state of New Mexico. 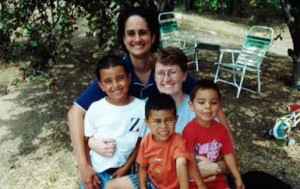 Jen Roper and Angelique Neuman
Together 26 years
Pojoaque, NM
Jen and Angelique met in Socorro, NM during their first semester at New Mexico Tech, and fell in love almost immediately. Although the State of New Mexico does not recognize their relationship, the couple considers themselves married for the 21 years they have been together. The couple settled in Northern New Mexico after the Los Alamos Labs hired Angelique to work as an engineer. Later, they adopted three siblings from the New Mexico foster care system. Their oldest child is enlisted in the U.S. Army and is currently in basic training.
Due to Jen’s sudden and severe illness, the couple cannot travel out of state to marry in a place that does not discriminate against same-sex couples. The only way they can hope to protect their family in this time of crisis and realize their dream of being legally married is for the New Mexico courts to move swiftly.
“I want to know that my family will be protected if I pass away,” said Jen Roper. “Angelique and I have been married in our hearts for 21 years and raised three wonderful children together. Because of my illness, we do not have the luxury of waiting years for the courts to decide whether loving, committed same-sex couples can marry in New Mexico. For us, the time is now.”