Clifton White spent years in and out of prisons, eventually becoming a “jailhouse lawyer,” husband, father and finally community leader, whose activism would once again land him behind bars.
By Davida Gallegos , Senior Communications Strategist , Communications

Clifton White’s first stop in New Mexico after being adopted was prison.

“One of my first memories of New Mexico was going straight from the airport to the Los Lunas prison with my adoptive dad and seeing the prison yard,” Clifton said. “We had to wait for him to finish working before he took us to our new home in Rio Rancho.”

Clifton was seven years old when he and his sisters were adopted by the Whites, a family in Rio Rancho. His adoptive father was a high-ranking state correctional officer.

That first stop turned out to be precedent. Clifton spent years in and out of prisons, eventually becoming a “jailhouse lawyer,” husband, father and finally community leader, whose activism would once again land him behind bars.

But all that was in the future. Entrenched in the New York City foster care system in the mid-1980s, Clifton said he just knew he had to grow up fast.

“I had gone through a lot by the time I was adopted,” Clifton said. “I was taught from a young age that police aren’t for us; they aren’t here to help us. To not even talk to them, even though I was eventually adopted into a police family.”

Clifton spent the early years of his life in the foster system wanting to be what people in his neighborhood called an “OG hustler.” They were people with resources, leaders who others looked up to and who took care of their community. Born against a backdrop of family instability, he saw these figures as aspirational.

His first brush with the criminal legal system would come soon after arriving in New Mexico.

“I was 11 years old and one of my friends gave me a bike. I didn’t even know it was stolen, but not having a bike and then riding a bike around led to an investigation,” he said. “At school one day, a police officer pulled me out of class and told me I was riding around on a stolen bike. So, I went to juvenile (detention) for larceny and was placed on probation.”

The Attack on Youth of Color in the 1990s

Selinda Guerrero, Clifton’s partner, grew up nearby, in Albuquerque, in the 1990s, when the city and nation were focusing police enforcement on kids of color.

In 1995, Albuquerque created its own version of New York’s “stop-and-frisk” policy that targeted youth as part of citywide crime prevention efforts. A key component of the New Mexico Department of Public Safety’s drug and crime control strategy was to increase funding for more police officers on the streets citing “juvenile crime and gang violence” as one of the top three crime issues facing Albuquerque.

This created a ripple effect that reverberated across communities of color in New Mexico. These early attempts at so-called “tough-on-crime” policies were rooted in racism, fueled mass incarceration, and failed to make communities any safer.

Selinda was only 12 when she started seeing kids on the street stopped and questioned by police, as well as officers storming kids’ parties.

“There was this extreme use of force happening against youth,” said Selinda. “And that perpetuated the experiences we were having as young people in Albuquerque.”

As a Black kid growing up in Albuquerque, the odds were stacked against Clifton. This proved to be true when he was arrested for a technical violation of his probation.

“I remember the probation officers used to do their rounds to check on me and sometimes they would pull up to my house or the Boys and Girls Club in Rio Rancho where I would hang out,” Clifton said. “One morning, me and my siblings were getting ready to leave the house when my (parole) officer and a police officer pull up and they had these shackles.”

The officers arrested Clifton and transported him to a detention center in Tucumcari where he was incarcerated for four days. It would not be his last time behind bars for parole violations, which send thousands of New Mexicans to prison even if they haven’t committed any new crimes.

The Vicious Cycle of the Criminal Legal System

According to the New Mexico Legislative Finance Committee, many of the people incarcerated in the state are not behind bars for new crimes. In fiscal year 2021, the recidivism rate due to technical parole violations, such as a missed appointment or failed drug test, more than doubled compared to the previous year,  from 13 percent to 30 percent.

“Clifton White is one of countless Black men in America whose life circumstances bring them into the criminal legal system,” said Leon Howard, legal director at the ACLU of New Mexico. “His story shows how every instrument of this system worked against him to keep him in an endless cycle of incarceration from the time he was just a kid riding a stolen bike, to when he was eighteen years old serving real time, and even after he completed his sentence.”

For Clifton, like many Black men caught up in the criminal legal system, it is impossible to put behind them youthful delinquent acts and move beyond governmental control of his liberty. His experience is a symptom of a much larger systemic problem that New Mexico is not immune to.

The Vera Institute reports that Black men are incarcerated at a much higher rate than others. In 2017, Black people made up 2 percent of New Mexico’s residents but 7 percent of the state’s prison population.

“Honestly, I think there is a war on Black people in New Mexico” Clifton said. “I think that if you’re not aligned with the blue, then you’re against them. You’re a target.” 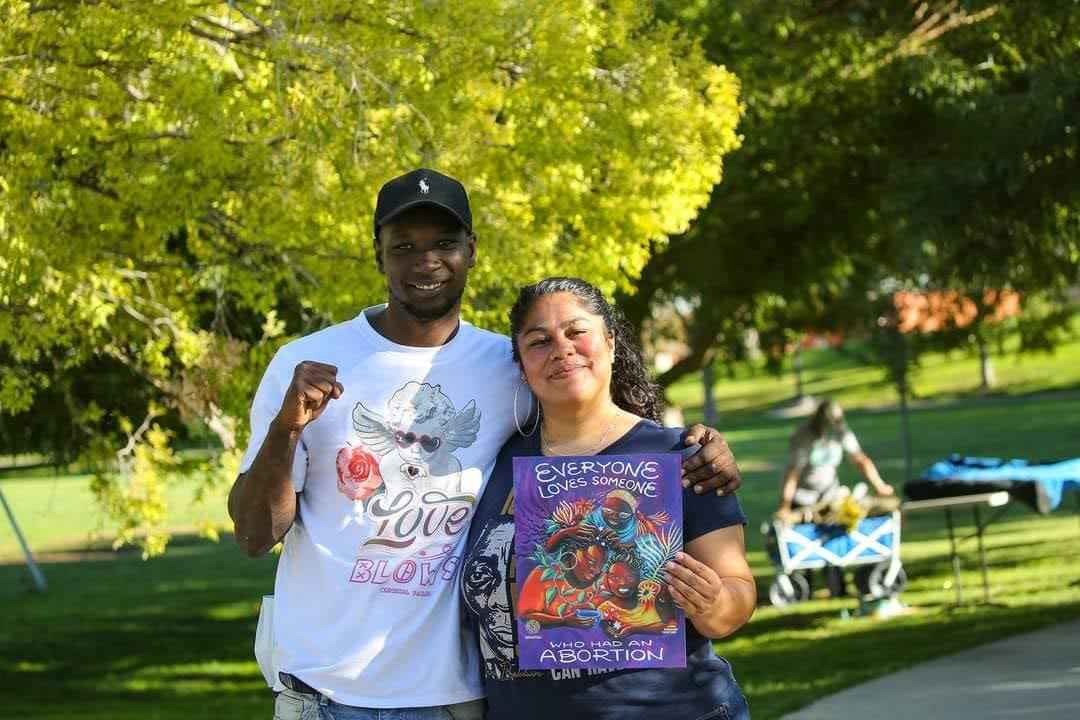 Activism is for Lovers

After years navigating the complex criminal legal system and frustrated with the lack of support, Clifton became a resource to other incarcerated people. Often referred to as a “jailhouse lawyer,” he advocated for himself and others inside and outside of prison walls.

“There were issues with my caseworkers, things kept falling through the cracks and getting messed up,” Clifton said. “I didn’t know how to read and write or spell and I had to figure out what habeas was on my own and start fighting back.”

After being released in 2008, he continued his activism and eventually met his now-wife, Selinda. She had also spent her life learning how to organize and advocate for herself and her family. By the time she met Clifton in 2009, she had been working with local advocacy groups for years. Together, they organized efforts to rally against police brutality and other injustices felt by communities of color.

But Clifton still had to report to a parole officer, which meant their home where they live with their children was subject to random visits and searches.

In one instance, her kids got home from school while both Selinda and Clifton were at work. Clifton’s parole officer took all the kids outside for questioning, placing Selinda’s two high-school-aged sons in handcuffs and ordered them to sit and wait on the sidewalk outside the home.

“He was interrogating the kids about Clifton, trying to make them tell a story about him and was just being really violent with my children,” said Selinda. “And this is a probation and parole (officer) putting children in handcuffs right outside their home without parents present.”

These experiences emboldened both Clifton and Selinda to continue their activism. They organized, marched and fought for justice for their family and for their community.

In May 2020, after the world watched as George Floyd was murdered by a Minneapolis police officer, Clifton and Selinda organized a largely peaceful protest against racism and police brutality along Central Avenue in Albuquerque.

The march, Clifton said, was a powerful experience but as the streets were emptying and the chants were dwindling at the end of the rally, Clifton and others heard about a group of teenagers being arrested. It was a risk for Clifton because of his parole, but as a protest organizer he felt a responsibility to respond to what was happening.

“There is this internal trauma being triggered for me because I’m looking at kids, 16 and 17 year olds, surrounded by officers in military gear, goggles and helmets and they are screaming at these kids,” Clifton said. “That’s what upset me. Because the way they responded. It’s an opportunity for accidents to happen, you know, like they grab the gun instead of the taser or plant evidence.”

Clifton’s participation in this protest and subsequent police encounter lead to unjust retaliation. He was arrested in June 2020 for an arbitrary parole violation and placed in solitary confinement for fourteen days. He wasn’t released until October 2020, when the ACLU of New Mexico and cooperating attorneys filed a motion with the court in his original criminal case setting forth that the state was unlawfully keeping him on probation.

“As a Black man, I don’t want pity. I don’t want sympathy. I want to be able to move,” said Clifton. “A human being should be able to move and have an opportunity to make decisions in which you won’t be retaliated against for not being on the same side.”

Clifton, who is working to open a nonprofit space for young people to explore culture and political activism, has become a community leader and source of inspiration like the “OG hustlers” he grew up admiring.