Qualified immunity and the quest to rebalance the scales of justice.
By Micah McCoy, Senior Communications Strategist, Communications

It was 9:30 at night when Joseph Lundstrom’s dog started barking, and he heard the sound of someone rapping on his front door. Not expecting any visitors at such a late hour, Lundstrom cautiously opened his front door when he was immediately blinded by a light shining directly into his eyes, and heard a woman identify herself as an Albuquerque Police officer.

Lundstrom recalls, “When the lady showed up at my front door, there’s no cop car out front. She’s hiding behind the bushes, shining the light on my front door.”

Alarmed by the unexpected appearance of someone claiming to be law enforcement, Lundstrom asked the officer to produce identification. She refused.

“Everything was wrong,” said Lundstrom. “That’s what set it all off. I wanted an ID. Then she pulled her gun.”

Unbeknownst to Lundstrom, a neighbor had called 911 earlier in the evening after hearing what appeared to be a possible case of child abuse in progress. The neighbor mistakenly gave Lundstrom’s address to the dispatcher as the location of the incident, setting the stage for the ensuing nightmare for Joseph Lundstrom and his girlfriend Jane Hibner.

The responding officer, Deborah Romero, demanded entry to Lundstrom’s home at gunpoint to investigate a report of child abuse. Unsure whether Officer Romero was actually a police officer, Lundstrom refused to allow her into his home and informed Romero that he did not have children. As Lundstrom turned to walk away to call 911 himself, Hibner opened the door and walked onto the frontporch to talk to the officer herself, closing the door behind her. Officer Romero immediately proceeded to place Hibner in handcuffs and called for backup, claiming that Lundstrom had barricaded himself in the house. 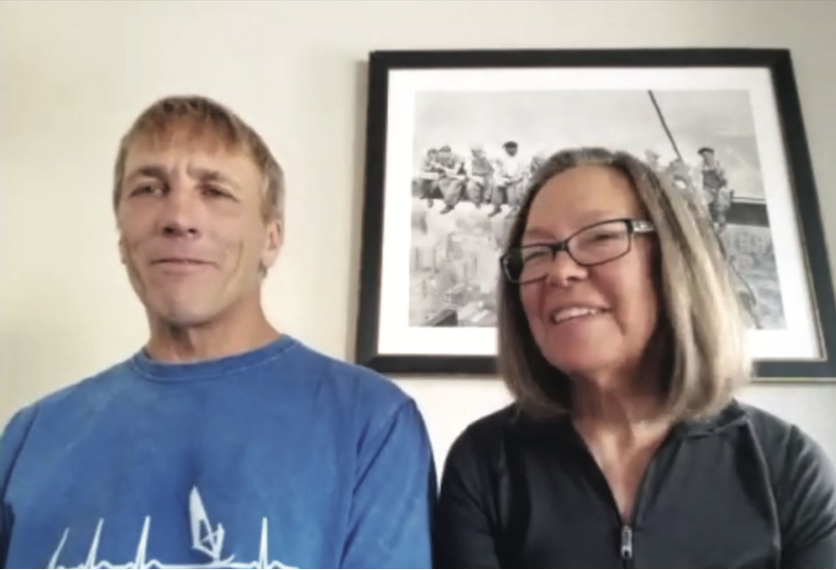 When backup officers arrived, despite receiving new information from the 911 dispatcher that the original caller may have provided the wrong address, they proceeded to detain Lundstrom, forcing him to the ground, wrenching his shoulder back, and pinning him down with a knee or elbow on the back of his neck. As Lundstrom was handcuffed and placed in the back of a police car, the officers proceeded to ransack his house, searching in drawers and other places far beyond the scope of a search intended to ascertain the safety of children that might be possibly inside. The interior of his house was destroyed.

After suffering the trauma of wrongful arrest, excessive force, and the ransacking of their home by Albuquerque police officers, Lundstrom and Hibner filed a lawsuit in the courts seeking justice for their ordeal. The judge threw out their complaint, citing qualified immunity.

Disgusted at the callous lack of justice from the courts, Lundstrom quit his job of 25 years at Sandia National Laboratory, sold his house, and moved away from Albuquerque.

“I lost faith,” said Lundstrom. “I think it was the first time when the judge sat down and said, ‘Ah, they’re police officers, they’re allowed to make mistakes.’”

So how did such a callous and dangerous instance of bad policing result in zero consequences for the officers involved? Two magic words: qualified immunity. Qualified immunity is a legal concept invented out of whole cloth by the U.S. Supreme Court beginning in the late 1960s to protect police officers from ‘frivolous lawsuits’ and financial liability when they were acting in good faith under circumstances where the law might not be completely clear. At first blush, that might sound entirely reasonable. Who would want to punish someone who was doing their best in a tough situation?

The problem is that qualified immunity has made it practically impossible to hold law enforcement and other public officials accountable when they violate people’s constitutional rights. The framers of the U.S. Constitution anticipated that all government authority is bound to be abused, so they built in mechanisms to protect individuals.

In Section 1983 of the U.S. Constitution, they laid out that individuals have the right to sue the state and agents of the state for violations of their civil rights. This is crucial, because without this means of redress, the Bill of Rights is just an unenforceable piece of paper.

One of the key provisions of qualified immunity is that it shields law enforcement from civil suits unless a court determines an officer has violated “clearly established law.” Again, the language on its face sounds reasonable, but in application qualified immunity is one of the leading drivers of injustice in the U.S. legal system. The standard of “clearly established law” has been interpreted by the courts to mean that an officer can’t be held liable for violating an individual’s rights unless a previous case exists with almost the exact same set of facts in which the court has ruled a police officer violated an individual’s civil rights. Here’s some examples of what that has looked like in the real world:

These cases are glaring examples of how qualified immunity has perverted justice to the point of absurdity. Extreme hair-splitting allows any number of heinous abuses to go unanswered just because the specific details of abuse do not conform to specific details in instances of past abuse. In a further Kafkaesque twist, when cases are thrown out because their novel circumstances permit qualified immunity, it renders it nearly impossible to create precedents that would prevent the use of qualified immunity in similar cases moving forward. It’s the ultimate Catch-22.

Doctors, lawyers, barbers, and construction workers are all expected to follow the law and can be sued for serious misconduct, but qualified immunity gives police and certain other public officials what amounts to a “get out of court free” card. Cloaked in qualified immunity, law enforcement officers everywhere are emboldened to use excessive force, knowing full well that they are highly unlikely to face any consequences. This of coursehas an outsized impact on people of color, who experience excessive use of force at far higher rates than White people, and further entrenches a culture of racist violence in police departments across the nation.

“Qualified immunity as it exists today cannot stand if we are to live in a just society,” said Barron Jones, Senior Police Strategist for the ACLU of New Mexico. “There is a crisis of accountability throughout New Mexico’s law enforcement agencies, corrections system, and other public officials who are shielded by qualified immunity. We must do away with this incredibly destructive doctrine if we want our courts and legal system to ever be a meaningful avenue for addressing civil rights violations in our state.”

To that end, the ACLU of New Mexico is working with a diverse set of groups, including local trial attorneys, the Innocence Project, and conservativeleaning Americans for Prosperity, to pass the New Mexico Civil Rights Act (NMCRA) in the upcoming 2021 legislative session. The NMCRA would be a groundbreaking piece of legislation that would effectively abolish qualified immunity as we know it in New Mexico. Currently, New Mexico’s laws are too narrow to allow individuals to successfully sue police and other public officials for constitutional violations, and lawsuits in Federal Courts are often dead ends due to qualified immunity. The NMCRA would finally open up legal avenues in state court for New Mexicans to find justice when police and other public officials violate their rights.

“By improving police accountability through the New Mexico Civil Rights Act, we stand to improve a whole host of problems created by qualified immunity in our state,” said Jones. “Not only will it provide a meaningful path for justice when people’s rights are violated, it will incentivize law enforcement departments throughout the state to adopt and properly enforce policies and procedures that protect the rights of New Mexicans. These changes collectively have the potential to improve public trust in law enforcement, and even save public dollars by disincentivizing abusive cultures in police departments across the state. ”

Everyone wants a justice system that is fair, but qualified immunity has its thumb placed firmly on one end of the scales of justice. Law enforcement officers occupy a position of great power in our society, so much so that they are authorized to kill people under certain circumstances. That kind of power, without an adequate counterbalance of oversight and accountability, will inevitably be abused. For decades, qualified immunity has provided a blank check for officers to abuse their power without consequence. It is time to tear it up.