ALBUQUERQUE, NM — Today, Senator Peter Wirth (D – Santa Fe) and Representative Jim Dines (R - Albuquerque) asked their legislative colleagues in New Mexico to focus on the issue of personal data privacy and to support the New Mexico Electronic Communications Privacy Act, which would make important advancements in protecting the privacy of all people in New Mexico. The bill simply requires police to get a warrant before accessing New Mexicans’ personal, private electronic data.

The announcement in New Mexico is one of 17 taking place simultaneously throughout of the country — from Hawaii to North Carolina, from Alaska to Alabama, and from New Hampshire to New York to New Mexico — with a diverse, bipartisan coalition of elected officials and citizens coming together to tell the nation they care about their digital privacy and are willing to fight for it. The message from these collective actions by the states is clear: where Congress is unwilling or unable to act to protect Americans’ privacy, or takes actions that are insufficient, the states are more than willing to step up and fill the void. Together, these states have introduced a range of new legislation that includes protections for student privacy, location tracking and personal data.

“Today, along with legislators in states across the country we are standing up to affirm our states’ and nation’s commitment to protecting Americans’ privacy,” said Senator Wirth, the bill’s senate sponsor. “The Electronic Communications Privacy Act is a commonsense measure that would make important advancements in protecting the privacy of all New Mexicans. The citizens of this state and nation should feel that their governments are working to protect their privacy, not violate it.” 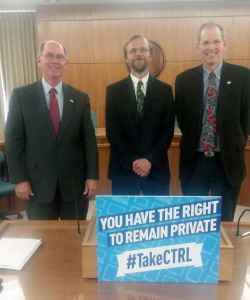 “This is a commonsense procedure that would require New Mexico law enforcement to obtain proper search warrants and wiretap orders before intruding into the privacy of citizens’ cellphones and other electronic equipment,” said Representative Dines. “The bill provides exceptions in case of emergencies. As shown by Senator Wirth and myself, this is not a Republican or a Democrat bill, but is a bill to protect our New Mexico citizens.”

“Every person should have the power to decide who they want to share personal, private information with. Privacy is not about keeping secrets, it is about exercising control over our own lives,” said ACLU-NM Policy Director Steven Robert Allen. “We’re grateful to Senator Wirth and Representative Dines for their efforts today, which affirms that privacy remains a core value in our state and throughout the United States of America.”

The bipartisan actions by the states, which highlight the strong and diverse nationwide support for legislation that empowers people to take control of their privacy, are mirrored by the results of a recent poll conducted by Anzalone Liszt Grove Research, which found that 90% of Americans believed (73% of them “strongly”) that the next president should make “protecting privacy so we have more control over our personal information” a policy priority.

The 16 states plus the District of Columbia putting forward privacy legislation today have the ability to impact nearly 100 million people, and they collectively account for 169 electoral votes.

The multi-state effort is using the Twitter hashtag #TakeCTRL.