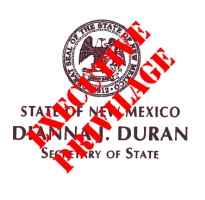 “These sorts of hit-and-run allegations are reckless and irresponsible,” said ACLU-NM Executive Director Peter Simonson. “Without offering any proof, the Secretary of State has undermined the public’s confidence in our elections system while hiding the evidence for her claims behind the cloak of executive privilege.”

Duran made the exception the rule, making liberal use of executive privilege to withhold public voting records and official correspondence from the ACLU of New Mexico and several journalists. In a response to journalist Heath Haussamen’s attempt to acquire these same records, the New Mexico Tax and Revenue Department affirmed Duran’s improper use of executive privilege, stating:

“It is disappointing that our Secretary of State would go to such extraordinary lengths to hide important public records from New Mexicans,” said ACLU-NM Staff Attorney Alexandra Freedman Smith. “Governor Martinez promised that her administration would usher in a new era of openness and transparency in New Mexico government. It’s a shame that Diana Duran does not share the governor’s commitment.”