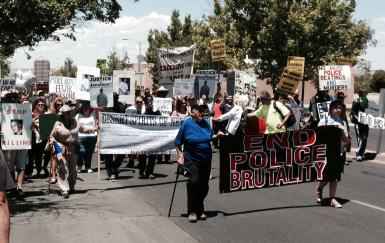 ALBUQUERQUE, NM—The ACLU of New Mexico issued strong condemnation of the Albuquerque Police Department today following revelations that undercover officers from the department’s criminal intelligence unit had attended last Saturday’s demonstration to gather intelligence on protesters. This morning The ACLU of New Mexico filed a public records request, demanding that the APD release any surveillance data they collected at the June 21 protest.
“Unless the APD had evidence that a crime was taking place during Saturday’s protest, they had absolutely no business gathering intelligence on protesters,” said ACLU-NM Executive Director Peter Simonson. “It not only shows a shocking disregard for free speech rights, but also a numbness to the community’s distrust of the APD and the need to rebuild public confidence in the department. Instead of trying to win back the public’s respect, the APD reminded the community that it broadly views civilians with disdain and distrust.”
At least one undercover officer was recognized in the crowd at the protest in Robinson Park, filming speakers at the protest and panning his camera through the crowd, documenting which citizens were in attendance. This incident may be in direct conflict with the Albuquerque Police Department’s own policy governing the Gathering of Criminal Activity Information. The following is an excerpt from that policy (1-21-6 [D], emphasis added):
D.  Unless the information is necessary and relevant to the investigation of criminal wrongdoing, information will not be collected on any individual or organization based on any of the following: “We’re filing a public records request to get at the heart of this matter: is APD conducting a legitimate investigation, or is it surveilling innocent civilians because of their political viewpoints?” said ACLU-NM Legal Director Alexandra Freedman Smith. “We know that the APD has spied on political activists in the past, it appears that we’re seeing more of the same.”
Past ACLU of New Mexico cases have identified two separate instances where APD inappropriately gathered data on innocent civilians because of their political activities: