My Life Was Derailed By a Traffic Ticket

A minor infraction cost me my driver’s license, my job, thousands of dollars, and over a decade entangled with a system that punishes poverty.

The morning started out like any other. I was on my way to work at a food safety lab, in a new car with tinted windows and a temporary plate displayed behind tinted windows. A highway patrol officer pulled me over and gave me a ticket for the windows and for not having a license plate, because he couldn’t see it. I thought it was a minor infraction. I didn’t know it would kick off an ordeal that has cost me thousands of dollars and three jobs for over a decade since. That traffic ticket changed my life and I am still feeling the effects every day.

I ended up facing fines of about $500 in total, including about $140 for tinted windows. The fine for the license plate was dismissed, but I still had to pay court costs. It was about $350 just for stepping into court, even though I did nothing wrong. At the time, I was making $20 per hour. So I got on a payment plan to pay it off. 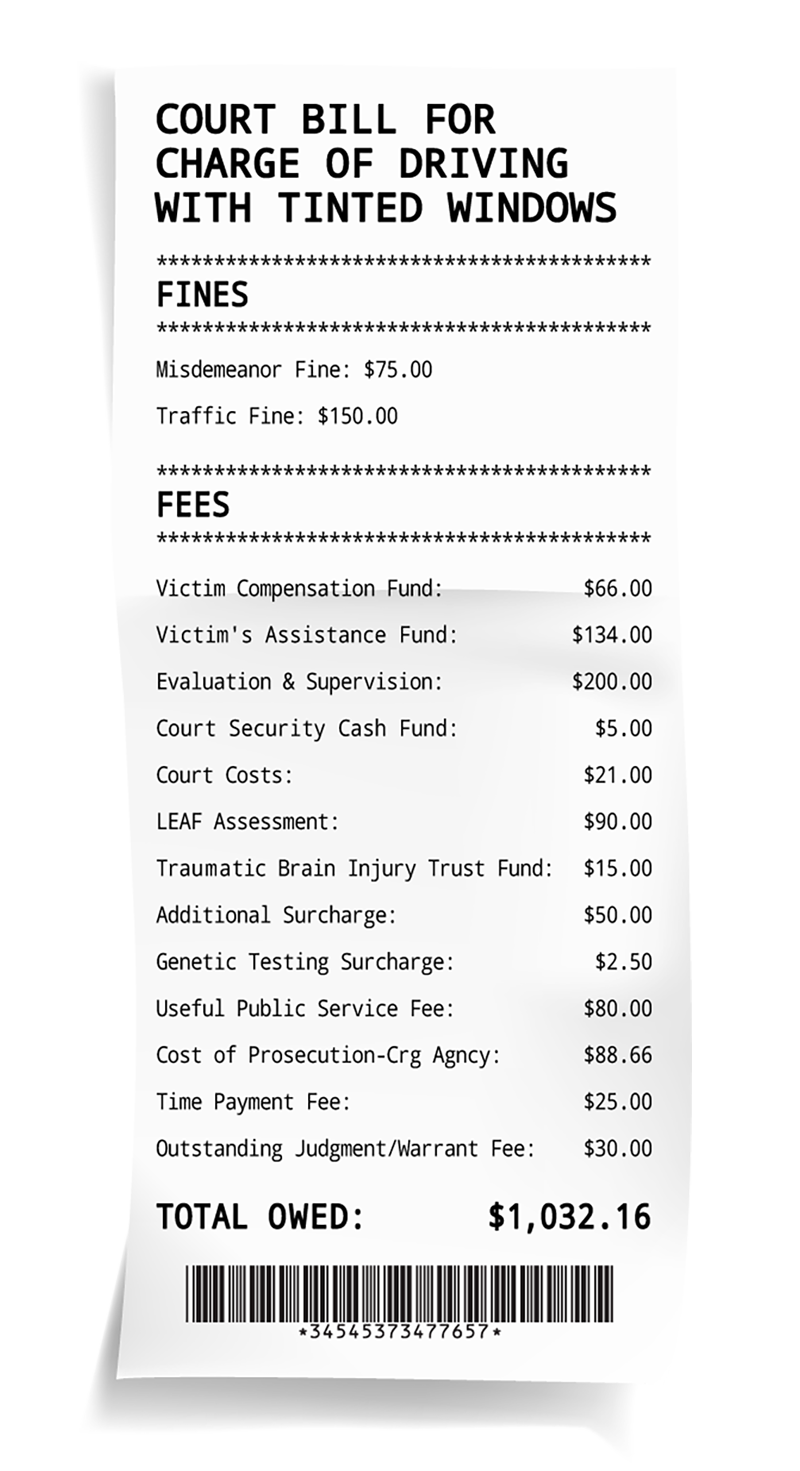 Not long after, the lab I worked at closed down and I lost my job — and my ability to make those payments. Meanwhile, the interest piled up and my court debt continued to grow. I thought things were looking up when I got another job, this time at a plastic manufacturing company in Loveland, Colorado. But I got pulled over again on my way to work. That’s when I found out that my driver’s license had been suspended for failing to make payments during that period when I didn’t have a job.

I missed work that day because I was sitting in jail, without the ability to call in. When I finally got out and tried to explain the situation to my employer, I found out I’d been automatically fired due to their strict no call, no show policy. “Sorry,” they said. “There’s nothing we can do.”

For the second time, I was in the predicament of having no job and a continuously growing amount of fines and fees. This time, though, I knew I didn’t have a license, which meant most jobs were out of reach since I’d have to drive to get there. At that point, I felt like I had no choice: either drive without a license, or miss out on an opportunity to make a living again and make those payments. I’d be breaking the law either way.

I had no choice: either drive without a license, or miss out on an opportunity to make a living again.

When I was pulled over that morning in 2011, I had no idea what was happening to me and how it would impact the rest of my life. Until then, my life felt like it was on track. I had a great job that allowed me to provide for my three kids and start the process of buying a house. I had no criminal record. And yet, I’ve spent the past 10 years entangled with the criminal legal system and mired in seemingly endless debt. My career has taken a hit and I’ve been unable to keep a steady, good-paying job since then. If I were rich, I would have been able to avoid all of the troubles of the past decade. But instead, I’m being punished for not having enough money.

Today, I still don’t have a driver’s license. My fines and fees now total about $3,000. I’ve been paying what I can but barely making a dent in my debt because of the interest rate. I don’t know how long it will take to pay off my debt and get my license back with the $12 per hour I make at my current job as a dishwasher at a sushi restaurant. My job is unstable, especially now with restaurants closing due to the pandemic. If I lose my job, I will once again have to make the choice between driving without a license and making those payments. Right now, I walk or use city bikes to get to work, but winter is coming.

I’m being punished for not having enough money.

What happened to me happens to millions of Americans who struggle to pay off government-imposed debts for minor traffic violations. State and local governments use these fines and fees to fund law enforcement and other government operations, but the inability to afford expensive tickets has no bearing on public safety and should not be treated as if it does. Punishing the inability to pay through driver’s license suspension criminalizes poverty and traps people in a cycle of debt and incarceration. The burden of this unfair system falls primarily on Black and Brown communities who are already overpoliced and have lower incomes as a result of documented systemic racism.

Many states have already started rethinking this system. Nevada, for example, has decriminalized minor violations like speeding tickets, driving with a broken tail light, and parking tickets so that they don’t result in arrest warrants, driver’s license suspension, or incarceration for people who can’t afford to pay them off. However, 12 states still have laws on the books that trap people in endless cycles of debt for these minor infractions. I’m not saying that people should not face consequences for violating these laws. But it shouldn’t destroy your life.

There is a bill in Congress right now that would go a long way in ending the cycle of poverty caused by the imposition and collection of fines and fees. The Driving for Opportunity Act would provide grants to states that do not suspend, revoke, or refuse to renew a driver’s license for failure to pay a civil or criminal fine or fee. The government should not use law enforcement to make money and should not punish people who can’t afford to pay. Courts and other public services should be fully funded through tax dollars, not through predatory tickets, fines, and fees that lead to policing for profit. Passing these reforms would protect millions of Americans from remaining trapped in poverty and being forced into making impossible decisions — like whether to pay off your fines or put food on the table.

Send a Message to Congress: Pass the Driving For Opportunity Act