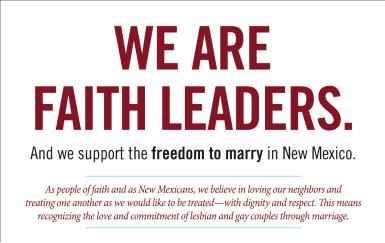 ALBUQUERQUE, NM—Today, nearly 140 faith leaders from rural and urban ministries across the state and representing a broad cross-section of denominations and faith traditions, endorsed the freedom to marry for all New Mexicans in a full page ad that ran in the Albuquerque Journal, The Santa Fe New Mexican, Las Cruces Sun News and The Alibi.
“Today’s ads represent the outpouring of support among people of faith in New Mexico who know that every gay or lesbian person is a member of someone’s family, and should be treated with compassion and respect,” said the Reverend David Wilson Rogers, Pastor at First Christian Church (Disciples of Christ) in Carlsbad.  “Many of us serve thousands of families every year and the freedom to marry is consistent with our faith and our values.”

The ad was purchased by the Why Marriage Matters New Mexico, a campaign by the ACLU of New Mexico, the national ACLU, Equality New Mexico, Freedom to Marry and the National Center for Lesbian Rights.  It comes a week after the coalition released a September 2013 poll that found 53% of New Mexicans support a favorable ruling by the New Mexican Supreme Court on marriage equality.  The Court is scheduled to hear arguments on Oct. 23rd.
“Nearly all faiths abide by some version of the Golden Rule, to treat others as we would like to be treated ourselves,” said Rev. Cannon Dr. Thomas Arrowsmith-Love of St. John’s Episcopal Church in Alamogordo.  “Finding a soul mate, marrying them, and spending the rest of one’s life with them is something that we all hope for both for ourselves and our children.  Denying that to gay and lesbian New Mexicans violates that Golden Rule.”
“While many of us support marriage equality, should gay and lesbian couples be allowed to marry in New Mexico, churches would still be protected,” said Pastor Harry Eberts of First Presbyterian Church in Santa Fe.  “No church or faith leader would ever have to perform marriages for couples if it went against their religious beliefs or violated their church doctrine.”
The full ad and list of signatories is here. Selected faith leaders are available for media interviews.