Memorial Day weekend 2019, Dametrio Maldonado was travelling down westbound I-40 with his daughter, Ellen, on the way to volunteer at the Acoma Pueblo Annual Seed Run. As their family did every year, they would join with the other members of their Kiva to mark the path runners would soon take around the base of the historic 367 foot sandstone bluff, Sky City Mesa, where the Acoma Pueblo people have lived since 1150 A.D.—the oldest continuously inhabited community in North America. The annual seed run, which draws runners from around New Mexico and beyond, helps raise funds towards helping the Acoma people preserve and maintain their customs and traditions, as well as funding school supplies for Acoma students.

As the pair took Exit 96 towards Acoma, their plans were put on hold when they came across a single car accident on the interstate overpass.

“There was a young lady sitting on the roadway next to the vehicle crying profusely, so I pulled the car over and I told my daughter to get out and see if she could render aid or if there was anything we could do for her,” recalls Dametrio.

After Ellen exited their car to check on the distressed motorist, Dametrio pulled the car over to the overpass shoulder and called 911. In minutes, Acoma tribal police arrived on the scene, followed shortly thereafter by New Mexico State Police Officer Sondre Loberg. Instead of joining the Acoma officer in tending to the crashed motorist and gathering statements, Officer Loberg fixated on Dametrio.

Instead of joining the Acoma officer in tending to the crashed motorist and gathering statements, Officer Loberg fixated on Dametrio.

Only moments after arriving at the scene of the accident, Loberg can be heard on the recording made by his dashboard camera angrily yelling at Dametrio over the external loudspeaker, “You! Leave! Move!”

Startled and confused, Dametrio attempted to inform Loberg he was waiting for his daughter while she gave her statement to the Acoma police, but Loberg cut him off with increasingly irate demands that he move his vehicle. Dametrio complied, giving the officer a wave and a smile in polite acknowledgement as he began moving his vehicle further down the road off the overpass.

Taking the smile as insult, Officer Loberg whipped his patrol unit around and followed Dametrio away from the scene of the accident. Loberg ordered Dametrio out of his vehicle, demanded his license and registration, and told him to place his hands on the hood of the patrol vehicle. 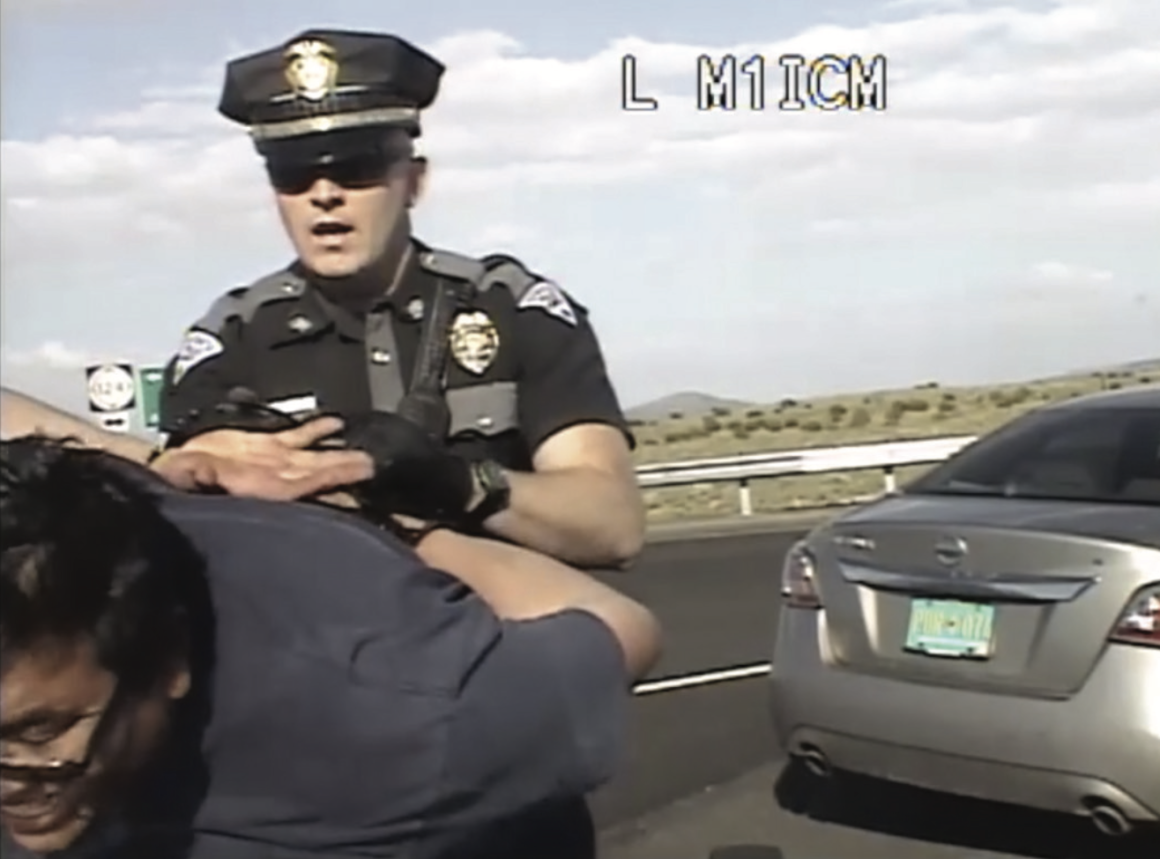 “You trying to fight me?,” Loberg asked, as he wrenched Dametrio’s arms behind his back, causing excruciating pain in his wrists and shoulders. “You been drinking today?”

"I was afraid that one wrong move would mean he would use deadly force against me.”

Loberg then slammed Dametrio against the hood of his patrol unit with enough force that his phone screen shattered in his pocket, and torqued the handcuffs down so tight that they bit deep into Dametrio’s wrists.

“I was in fear for my life,” remembers Dametiro. “I didn’t say anything to him, or resist. I was afraid that one wrong move would mean he would use deadly force against me.”

Still without explaining why he was detaining Dametrio, Loberg shoved him into the back of his patrol unit, nearly slamming the door on his leg as he struggled to pull himself fully inside. He remained in the back of the patrol vehicle for more than 20 minutes with his arms restrained behind his back in agonizing pain until the Acoma tribal police officer intervened and persuaded Loberg to release him.

But the ordeal still wasn’t over. Even after Officer Loberg removed the handcuffs, he continued to verbally harass and intimidate Dametrio for several more minutes by the side of the road, threatening to arrest him and hold him in jail without bail over the holiday weekend. Finally, he issued Dametrio a traffic citation for “unlawful parking” and released him. The citation was later dismissed when Officer Loberg failed to appear in court.

“One of the last things the officer told me before he let me go was ‘I’ll remember you.’ Now anytime I’m driving down the road, it’s always in the back of my mind that it could happen again."

Experiencing lingering pain in his arms and shoulders following the incident, Dametrio went to the emergency room to assess his injuries and ultimately had to travel to Albuquerque for advanced imaging. Loberg’s excessive use of force required Dametrio to undergo physical therapy and forgo farming his land during the ensuing growing and harvest seasons. His injuries also prevented him from participating in traditional ceremonies and dances that are integral to the cultural and spiritual life of the Acoma people. It took the better part of a year for Dametrio to fully recover physically from the encounter. But some wounds take longer to heal.

“One of the last things the officer told me before he let me go was ‘I’ll remember you.’ Now anytime I’m driving down the road, it’s always in the back of my mind that it could happen again,” said Dametrio. “I believe that you ought to be able to call for help or render aid when you come upon someone in distress without fearing that the police will brutalize or wrongfully arrest you.”

Dametrio's story is part of a larger problem

Sadly, Dametrio’s experience is far from rare. Police discrimination, harassment, and violence against Native Americans is endemic in the United States. According to a poll conducted by National Public Radio, 55% of Native Americans living in majority Native areas report they have experienced discrimination when interacting with police. According to a 2009 National Council on Crime and Delinquency Report, Native Americans are arrested and incarcerated at disproportionate levels. Compared to whites, Native people are 1.5 times more likely to be arrested and four times more likely to be booked into prison. Most disturbingly, the CDC reports that, when compared to their percentage of the U.S. population, Native people are more likely to be killed by police than any other group—more than three times the rate of whites. Many journalists and academics following the issue suspect the actual rates to be even higher, given that police shooting victims of Native American descent are often misidentified by police as belonging to other races.

"From racially motivated stops, all the way through elevated arrest rates and disproportionately harsh sentencing, the system is stacked against Native Americans."

“Native Americans face discrimination across the entire continuum of the criminal legal system, not just in New Mexico, but nationwide,” said ACLU of New Mexico Indigenous Justice Attorney Preston Sanchez. “From racially motivated stops, all the way through elevated arrest rates and disproportionately harsh sentencing, the system is stacked against Native Americans. We likely don’t even have a clear picture of how bad things really are. The statistics available to us now probably only represent the tip of the iceberg.”

Because of the system wide inequities Native Americans face baked into every area of our society — from criminal justice, to education, to access to healthcare and basic services—the ACLU of New Mexico has increased its investment in indigenous justice work. Over the last year, the ACLU of New Mexico has hired a dedicated attorney to litigate indigenous justice cases and filed lawsuits on behalf of a Cochiti Pueblo artist held at gunpoint by Santa Fe Police and a Navajo Albuquerque high school student who experienced racial harassment from a teacher.

On March 3, the ACLU of New Mexico continued its commitment to protect the rights of Native Americans by filing an excessive force lawsuit against New Mexico State Police on behalf of Dametrio Maldonado.The lawsuit also included a claim for First Amendment violations based on the retaliation Dametrio faced for smiling at Loberg, which is a protected form of expression under the constitution. 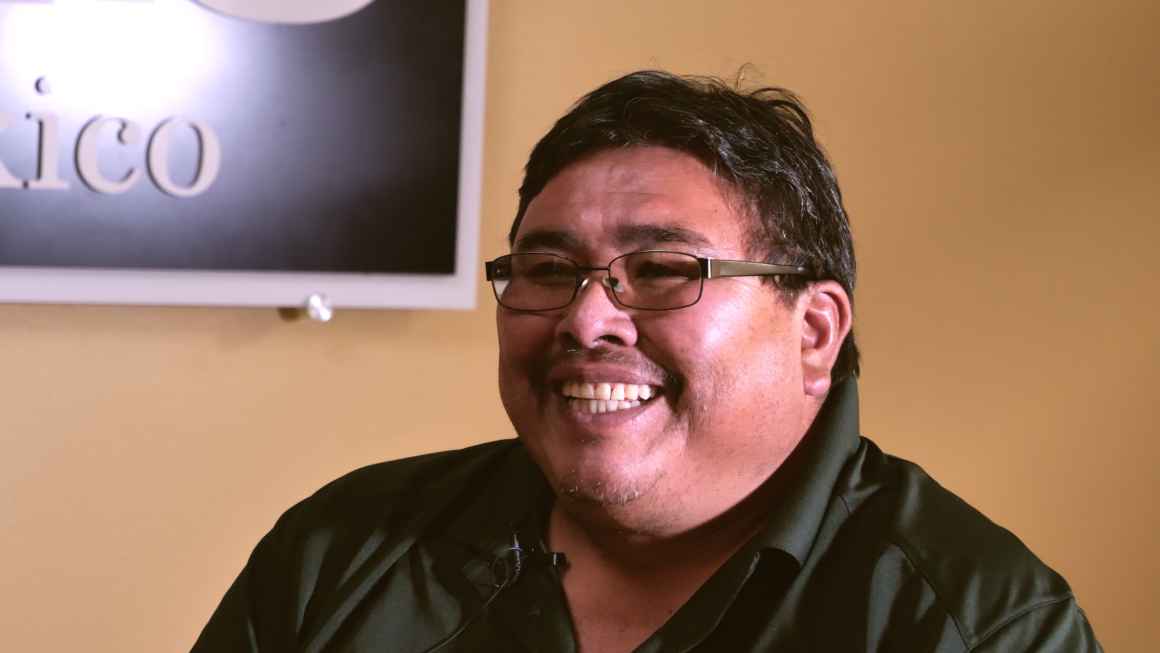 "This kind of dangerous and discriminatory policing has no place in a diverse state like New Mexico.”

“Mr. Maldonado was simply trying to do the right thing by rendering aid to a crashed motorist,” said Sanchez, “Instead of thanking him for doing what any humane and civic minded person would do, a responding NMSP officer singled him out for harassment and abuse resulting in lasting injury. This kind of dangerous and discriminatory policing has no place in a diverse state like New Mexico.”

New Mexico is home to twenty-three Native American pueblos, nations, and tribes, many of which have called this land home since time immemorial. They are the original inhabitants of New Mexico and they continue to be a vital and integral part of our communities, culture, and economy. Native people deserve to be treated with dignity and respect, especially by the law enforcement officers who are sworn to serve and protect them. With this lawsuit, we’re putting New Mexico State Police and law enforcement throughout New Mexico on notice that discrimination and abuse will not be tolerated on our watch.