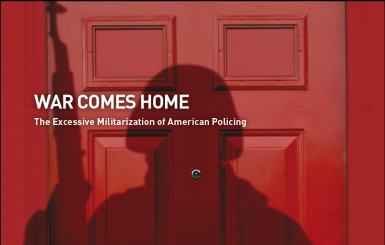 Report Shows Injustice, Suffering, Caused by SWAT Teams Deployed for Low-Level Police Work, Not Crises
NEW YORK – After obtaining and analyzing thousands of documents from police departments around the country, today the American Civil Liberties Union released the report War Comes Home: The Excessive Militarization of American Policing. The ACLU focused on more than 800 SWAT raids conducted by law enforcement agencies in 20 states and on the agencies’ acquisition of military weaponry, vehicles, and equipment.

“We found that police overwhelmingly use SWAT raids not for extreme emergencies like hostage situations but to carry out such basic police work as serving warrants or searching for a small amount of drugs,” said Kara Dansky, Senior Counsel with the ACLU’s Center for Justice. ”Carried out by ten or more officers armed with assault rifles, flashbang grenades, and battering rams, these paramilitary raids disproportionately impacted people of color, sending the clear message that the families being raided are the enemy. This unnecessary violence causes property damage, injury, and death.”

The report documents multiple tragedies caused by police carrying out needless SWAT raids, including a 26-year-old mother shot with her child in her arms and a 19-month-old baby critically injured when a flashbang grenade landed in his crib.

“The national trend of police militarization is clearly felt here in New Mexico,” said ACLU of New Mexico Executive Director Peter Simonson. “We have towns like Farmington operating armored vehicles and the Albuquerque Police Department shooting civilians at alarming rates. This military mindset coupled with assault style tactics and weapons positions the public as the enemy, rather than human beings they have sworn to serve and protect.”

The report calls for the federal government to rein in the incentives for police to militarize. The ACLU also asks that local, state, and federal governments track the use of SWAT and the guns, tanks, and other military equipment that end up in police hands.

“Our findings reveal not only the dangers of militarized police, but also the difficulties in determining the extent and impact of those dangers. At every level – from the police to the state governments to the federal government – there is almost no recordkeeping about SWAT or the use of military weapons and vehicles by local law enforcement,” noted Dansky.

In addition, the report recommends that state legislatures and municipalities develop criteria for SWAT raids that limit their deployment to the kinds of emergencies for which they were intended, such as an active shooter situation.

The report is available here: www.aclu.org/militarization.