ROSWELL, NM—Today, the American Civil Liberties Union (ACLU) of New Mexico settled its lawsuit against the City of Roswell, NM alleging that police officers repeatedly violated the First Amendment free speech rights of two local street preachers, Joshua and Jeremy De Los Santos. Joshua and Jeremy are brothers and members of the Old Paths Baptist Church in Roswell, where Joshua is the pastor. Both believe they have a duty to preach the Gospel in public, and both regularly do so. However, the Roswell Police Department (RPD) arrested both brothers multiple times for expressing their sincerely held religious beliefs in public, as is their right under the First Amendment.

Under the terms of the settlement, the City of Roswell will pay $97,000 in compensatory and punitive damages. 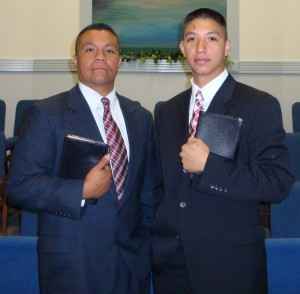 “This settlement is a significant victory for free speech in New Mexico,” said ACLU-NM Executive Director Peter Simonson. “Police officers may disagree with the content of your speech, but that does not give them the right to arrest you. Today we affirm the right of every person to express their opinions—even unpopular opinions—without fear of arrest or harassment by the government.”

In the two years preceding the ACLU’s lawsuit, Roswell police officers arrested Jeremy De Los Santos five times for preaching in public and arrested Joshua twice for the same activity. In every case, the charges against the plaintiffs were either dropped, dismissed by a court of law, or overturned as unconstitutional.

The De Los Santos brothers alleged that the Roswell police falsely arrested them without probable cause for exercising their First Amendment right to Free Speech on public property. The brothers also claim that RPD confiscated phones, cameras, camcorders and a bullhorn, some of which were never returned. Jeremy De Los Santos also claimed that RPD officers used excessive force on two occasions.

“This settlement sends a strong message to police departments everywhere that you cannot target people for arrest or harassment simply for lawfully expressing their religious beliefs in public,” said Jeremy De Los Santos. “The right to free speech is one of our most precious freedoms, and today that freedom has been upheld.”
Read the original legal complaint here: De Los Santos v Roswell.

The U.S. Postal Service Was Never a Business. Stop Treating it Like...

Know Your Rights When Protesting

Muslim Man Harassed While Praying at His Son's Grave

No line to walk on ABQ panhandling law

ACLU of New Mexico Files Complaint with the Department of Justice...