By Micah McCoy
U.S. Customs and Border Patrol fired probationary agent because of his opinions on ‘drug war’ and immigration 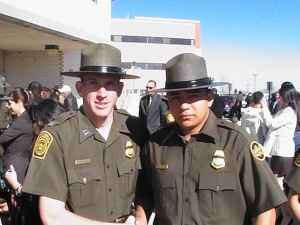 
EL PASO, T.X. -- Today, the American Civil Liberties Union of New Mexico (ACLU-NM) filed a lawsuit in U.S. District Court for the Western District of Texas on behalf of a U.S. Customs and Border Patrol agent who was fired because of his personal political opinions. Plaintiff Bryan Gonzalez was an agent with two years of experience and excellent performance reviews when the Border Patrol terminated his employment after learning that Gonzalez held certain political opinions pertaining to drug legalization and immigration.
"Firing a public servant because of their political opinions is an egregious violation of the First Amendment," said ACLU-NM Executive Director Peter Simonson. "We cannot require nor should we expect uniformity of thought within our law enforcement institutions. Purging the ranks of government employees who fail "ideological purity" tests is about as un-American as it gets."
Patrolling near Deming, New Mexico in April 2009, Gonzalez pulled his vehicle up next to a fellow CBP agent who was in the same vicinity. In the course of a casual discussion concerning the drug-related violence in Mexico, Gonzales remarked that he believed that legalization of drugs would be the most effective way to end the violence. He also related to the other agent that, as a former dual U.S.-Mexican citizen, he understood the economic factors that drive migrants to cross the border without documentation to seek work.
Word of Gonzalez's opinions on these matters quickly spread to his supervisor, who informed the Joint Intake Command in Washington, D.C.  Internal Affairs launched an investigation soon after, and the Border Patrol terminated Gonzalez in October 2009, just weeks before his probationary period expired. The termination letter stated that Gonzalez held "personal views that were contrary to the core characteristics of Border Patrol Agents, which are patriotism, dedication, and esprit de corps."
"I was terminated not because my service was inadequate, but because I hold certain opinions that are shared by millions of my fellow Americans," said Gonzalez. "I am no less patriotic or dedicated to excellence in my work because I respectfully disagree with some of our current border enforcement policies. It was wrong for the U.S. Border Patrol to retaliate against me for exercising my free speech rights guaranteed by the very Constitution I swore to uphold."
ACLU-NM seeks a declaration by the court that the Border Patrol violated Bryan Gonzalez's First Amendment right to free speech, as well as compensatory and punitive damages.
READ THE LEGAL COMPLAINT
ACLU-NM Cooperating Attorney George Bach and ACLU-NM Co-legal Directors Julie Sakura and Reber Boult represent the plaintiff in this case.
FOR IMMEDIATE RELEASE January 20, 2011
CONTACT: Micah McCoy, (505) 266-5915 Ext. 1003 or mmccoy@aclu-nm.org

The U.S. Postal Service Was Never a Business. Stop Treating it Like...

Know Your Rights When Protesting

Muslim Man Harassed While Praying at His Son's Grave

No line to walk on ABQ panhandling law

ACLU of New Mexico Files Complaint with the Department of Justice...

City of Albuquerque Agrees to Sanctions After Violating Agreement...