ACLU Seeks Ruling that Physicians Can Provide Aid in Dying

Seek Ruling That Physicians Can Provide Aid In Dying

ALBUQUERQUE, NM – Two prominent Albuquerque physicians, Dr. Katherine Morris and Dr. Aroop Mangalik, the national nonprofit Compassion & Choices and the American Civil Liberties Union (ACLU) of New Mexico filed a lawsuit today to clarify the ability of mentally competent, terminally ill patients to obtain aid in dying from their physician if they find their dying process unbearable. The doctors are asking the court to declare that physicians who provide a prescription for medication to a mentally competent terminally ill patient, which the patient could consume to bring about a peaceful death, would not be subject to criminal prosecution under existing New Mexico law, which makes a crime of assisting another to ‘commit suicide.’ The choice of a dying patient for a peaceful death is no kind of ‘suicide,’ the physicians’ lawsuit asserts, and the physician does not assist such a patient in ‘committing suicide.’ Laura Schauer Ives, managing attorney for the ACLU of New Mexico, and Compassion & Choices Director of Legal Services Kathryn Tucker represent the physicians.

Dr. Morris, a surgical oncologist, a cancer researcher and an assistant professor of medicine, told a news conference outside the Second Judicial District Court in Albuquerque, “A couple of years ago a patient of mine asked me for aid in dying, and because she lived in a state where it was already affirmatively legal I had no fear of supporting her request. But it was a hard decision. I had voted for the law twice. I was raised to respect people’s autonomy and decisions. But it was hard when a lovely woman to whom I was very attached asked for it. I wrote her a prescription, she got medication and she held onto it for a long time. After many months of good times and hard times, she decided – she decided – not to endure any further suffering. I hope the court will rule that patients in New Mexico have the same autonomy over their end-of-life choices.”

Dr. Aroop Mangalik is a practicing oncologist, as well as a clinical researcher in internal medicine and hematology-oncology and a professor of medicine. He provides primary care to adults, some of whom are terminally ill. Dr. Mangalik stated at the press conference, “Without honesty and compassion, too many patients suffer needlessly in the last few weeks of their life. No one should force a dying person to suffer. Doctors already provide treatments for terminally ill patients that are intended to ease suffering, but which we know may advance the time of death. When doctors write prescriptions for aid in dying in response to patients’ requests, their intention is primarily to provide patients with comfort and control.”

Ms. Tucker told the news conference, “This case is a statutory construction case: the court is asked to determine the scope of a statute. We expect that this case can move quickly, as it raises a question of law that the court should be able to resolve in a relatively short time. If the court rules in the plaintiffs’ favor, and holds that aid in dying is not prohibited by New Mexico law, physicians in New Mexico will be able to provide this intervention without fear of sanction.”

Ms. Ives explained the constitutional claims that arise, if the court should find that the state’s statute against “assisting suicide” does reach the medical practice of aid in dying. “In its vagueness, and by violating the private physician-patient relationship, the statute applied to aid in dying would deny the due process of law the constitution guarantees. It would deny doctors equal protection of the laws. It would deprive doctors of the right to free speech. And by denying the decision-making power of New Mexico citizens in one of the most intimate and fundamental areas of their lives – the way they confront the end of their lives – it would deprive them of their inherent and inalienable rights.”

“I’m here today, first and foremost,” said Dr. Morris, “because this is an issue that doesn’t get talked about at all or only in sound bites. As a society our persistent refusal to face death is hurting us. But I also am here for selfish reasons. New Mexico is my home and this is an option I would want. I don’t know if I would take it, but I want the right.”

The lawsuit was filed in the Second Judicial District Court. The legal complaint may be viewed here: Morris v. New Mexico (Amended). 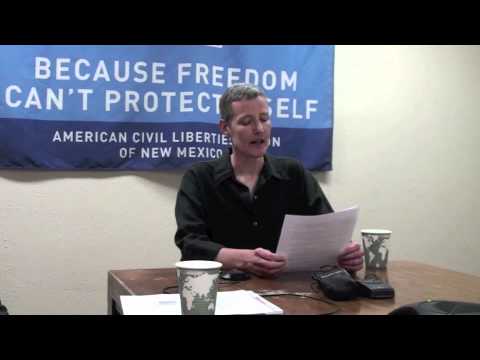