NEW YORK –American Civil Liberties Union affiliates in 38 states, including New Mexico, sent requests today to local police departments and state agencies that demand information on how they use automatic license plate readers (ALPR) to track and record Americans’ movements. The DEA has already confirmed that these devices are currently deployed in New Mexico.

In addition, the ACLU and the ACLU of Massachusetts filed federal Freedom of Information Act requests with the departments of Justice, Homeland Security and Transportation to learn how the federal government funds ALPR expansion nationwide and uses the technology itself.
ALPRs are cameras mounted on patrol cars or on stationary objects along roads – such as telephone poles or the underside of bridges – that snap a photograph of every license plate that enters their fields of view. Typically, each photo is time, date, and GPS-stamped, stored, and sent to a database, which provides an alert to a patrol officer whenever a match or “hit” appears. 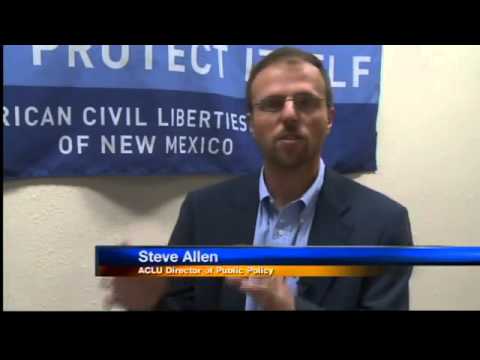 “Automatic license plate readers make it possible for the police to track our location whenever we drive our cars and to store that information forever,” said Catherine Crump, staff attorney with the ACLU’s Speech, Privacy & Technology Project. “The American people have a right to know whether our police departments are using these tools in a limited and responsible manner, or whether they are keeping records of our movements for months or years for no good reason.”

ALPRs are spreading rapidly around the country, but the public has little information about how they are used to track motorists’ movements, including how long data collected by ALPRs is stored, and whether local police departments pool this information in state, regional or national databases. If ALPRs are being used as a tool for mass routine location tracking and surveillance and to collect and store information not just on people suspected of crimes, but on every single motorist, the American people should know that so that they can voice their concerns.

ALPRs have already proven controversial. Just last month the Drug Enforcement Administration withdrew its request to install ALPRs along certain portions of Interstate 15 in Utah after they were met with resistance by local lawmakers.

“Tracking and recording people’s movements raises serious privacy concerns, because where we go can reveal a great deal about us, including visits to doctor’s offices, political meetings, and friends.” said Kade Crockford, Director of the Technology for Liberty Project of the ACLU of Massachusetts. “We need legal protections to limit the collection, retention and sharing of our travel information, and we need these rules right away.”

More information about the requests is available at: aclu.org/plates