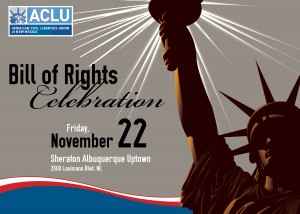 Join the ACLU of New Mexico as we celebrate another incredible year of defending basic freedoms in New Mexico. Enjoy dinner, drinks, and live music as we gather with to honor the men and women who have helped protect and extend our civil liberties.
Friday, November 22 6:00 PM to 9:00 PM
Sheraton Uptown Hotel, Main Ballroom 2600 Louisiana Blvd. NE Albuquerque, NM 87110
Tickets $125 per person. Tables available for purchase.

Contact Director of Philanthropy Ernest Rodriguez-Naaz for more information at (505) 266-5915 x1001 or erodriguez-naaz@aclu-nm.org. Peter Maass has worked for the Wall Street Journal, New York Times, the Washington Post, the Atlantic, the New York Times Magazine and many other prominent journals and magazines. Maass has reported on numerous conflicts, including Bosnia and the second U.S. war in Iraq, and in recent years has distinguished himself one of the nation’s foremost watchdogs of our sprawling surveillance state. He recently published an exclusive interview with Edward Snowden, the National Security Agency whistleblower who exposed the mass surveillance programs used to spy on innocent Americans.

Maass will speak on the United States surveillance state, his recent interview with Snowden, and the future of privacy rights in the digital era.